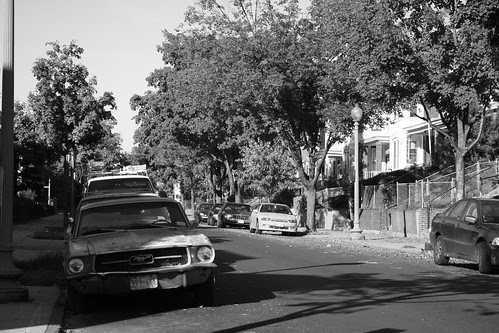 So with Halloween coming up, will there be a large number of trick or treaters?

That's a good question. I haven't been at home (except for tiny bits of the night) the past three Halloweens to know the answer. I know that many kids would go south of H Street to Tricker-Treat. One thing thing that sometimes catches people off guard is that you will see many older kids (teenagers)coming around to get candy. Also, you will see LOTS of kids Tricker-Treating without costumes (the older kids almost never wear costumes). It is always better to stock up on candy and have extra stuff, than to not have any when kids ring the bell. One interesting thing is that I have never seen kids around here smash a jack-o-lantern (something that always happened where I grew up). But the no costume thing is odd.

The Historic Structure Report for Eastern Market discusses how H Street supplanted the Market because of it's more modern marketing methods. One of the things was to dress the windows for Halloween and give stuff to kids trick-or-treating.

That's so funny that you mention that. I was just saying to Alphonso (at R&B Coffee) this morning that I could imagine some kind of kids tricker-treating/Halloween celebration on H Street in a few years.