Tom Sietsema Not a Fan of Tru Orleans 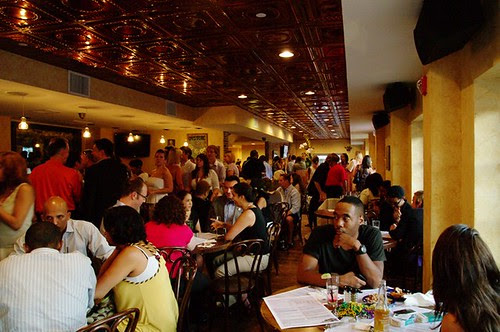 Sadly, I visited Tru Orleans with a NOLA buddy of mine and we agree - not worth the price. I really was looking forward to a new restaurant so near my home. Either bring down the price or offer better food.

Well, the owner, Tru, or someone else has put a lot of money into that rehab. So, they either get their shit together or sell. Either way, H St thanks Mr Orleans. Or he turns it into a strip club. In which case, I might thank him depending on the talent

become a dive and start serving nothing but po boys. Cut this fancy shit out. Your po boys are amazing..the rest of the cuisine is overpriced drivel

Give it time. I have confidence that the market for $18 red beans and rice will eventually bounce back.

well, there's always a huge wait for Matchbox too, for some reason. And The Cheesecake Factory.

Quality food and reasonable prices seems to little to do with popularity.

I just can not believe that somone looked at the business plan for that place and said, "Yes, this is viable."

People still believe, "If you build it, they will come -- and pay far more than they should to do so because they know how much it cost to build this place, and I have to make a certain amount per plate to break even."

The bad reviews will not help them out, I am sure.

this place needs a gordon ramsay kitchen nightmare rescue. the space is very well done. they just need to simplify and square their asses away with an easier, simpler and much more affordable menu.

I'm from NOLA. I took my mom there and it was okay. Went back a second time with a date when it was much busier and had a less satisfying experience (to their credit, they knocked off a good portion of our bill to make up for it). The bread pudding is pretty good. The decor is great. I think they could turn it around. Every one of the chefs should be from New Orleans, by the way. You just can't learn that cuisine, it has to be in your DNA, in my humble opinion...

Schdenfreude. Tru Orleans had its defenders, it's open-minders, it's wait until it shapes uppers, etc. But the writing was on the wall when they released that menu prior to their opening. As Anon 11:25 says, it is mind boggling how anyone could have approved this business plan, particularly with loans being as tight as they are nowadays.

I hope that whoever takes over the space can do as Anon 11:48 suggests--focus on food that's cheaper, and simpler but well-executed. Trying to be Acadiana is a losing proposition unless they can score the top level kitchen talent that can perform to those high standards (a prospect that's highly unlikely).

I understand and agree that H St. can and should cater to a diverse audience. Not every business needs to woo the Brooklyn Industries set. Fine. But do what you do well, or don't do it at all. And regardless of your particular business or clientele, don't charge exorbitant prices for a woefully uneven or consistently substandard product.

Let's see how Sweet Charleston's does in the Evolve space--I do hope it does well and gives the neighborhood an authentic soul spot, even if it is a franchise. Everyone should have a place to go out on H. Hopefully retail is not too far in the future either.

Yet again, people are missing the point. This place is not about the food. It's about the alcohol. They only serve food because they have to. Think their food is overpriced and not very good? They don't care -- they don't have to.

Look at the reviews in Yelp. They fit into two categories: people commenting on the food, who've given it 1-3 stars, and people who just went there to drink, who've given it 3-4 stars. The latter group is their target audience.

I second everything Salamander Jones just said. Very well stated. While I've seen some places go from a stumble to a sprint, it is clear that Tru Orleans is not responding to criticism and is stuffing their ears with cotton. The chef is not up to par, the dishes are not authentic, the prices are not reflective of the quality and the drink menu is not that interesting. Either we hear some feedback soon from Tru Orleans or it will wither within a year. I still hope it gets its shit together, starting with a new chef and new GM. But I don't think Tru Redding has established any resilience as a restaurateur. Titty bars on the other hand...

I can't believe folks are talking about a place with consistently long waits as failing.

And yes, it's about the drinks, and atmosphere. I do think they will improve the food.

I just can not believe that somone looked at the business plan for that place and said, "Yes, this is viable."

You obviously have not read that many business plans, particularly for District restaurants. There's nothing wrong with their plan, it's a matter (right now) of execution. Which can be quickly fixed with a few changes.

"...it is mind boggling how anyone could have approved this business plan, particularly with loans being as tight as they are nowadays..."

I went to this restaurant several weeks after it opened. It was one of the worst restaurant experiences of my life. The waitress was pushy and very poorly trained, constantly (i.e. every 3-5 minutes) asking if we were done, did we want to order something else, would we order something else, were we ready to go, etc. My water glass had a huge crack up one side. The "plastic" menus allowed the diners at other tables to basically blind you with the light from the open door/windows every few seconds as they waived them around making their choices. The gumbo had multiple bone shards in it. The floor is laminate wood so its already scratched to all hell around the bar. The "front door" is actually an interior low-grade builder-grade french door and feels like crap when you open it/use the handle to enter the building. The busboys, no less than 5 times, took my or my companion's dishes prior to us being finished and several times stood behind us while we took our last two bites, one time leaning in to grab it before the spoon even got to my mouth--tacky, awful, disgusting, disconcerting, and I just will never ever ever go back.

When are the poles being installed?