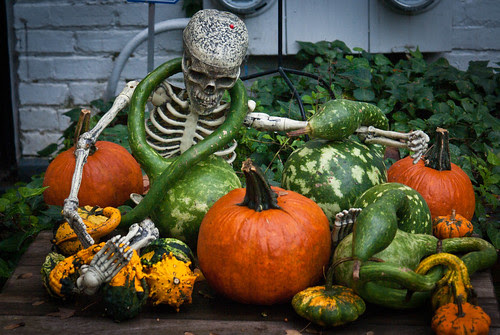 Halloween Decor on Capitol Hill - 900 Block of C Street SE, a photo by caroline.angelo on Flickr.
It's that time of year again, so let's review the basics of Halloween in our neighborhood. this is a short guide, that's a good reminder for longtimers, and a good primer for newbies. The basics:

1. Do kids trick or treat around here? Absolutely. Because Halloween comes on a Monday this year you will probably get kids on both Monday and Saturday nights (possibly Sunday too?).

2. I bought candy. Why aren't kids are coming to my house? It's dark out there. Turn on your porchlight/light your pumpkin. Otherwise kids don't know you are home. Not getting the turnout you expected? Maybe your neighbors have dark houses. Kids will skip a mostly dark block.

3. Is someone going to smash my pumpkin? Probably not. GI grew up mostly in the midwest. People always smashed our pumpkins (sometimes even before Halloween!). I've not had a single pumpkin (carved, or uncarved) smashed since I move here in 2001. I've heard a few stories of smashed pumpkins in DC, but I think it's rare.

4. Why the hell aren't those kids wearing costumes? Yes, that seems weird (and lazy) to me too. There are lots of cheap or free ways to dress up for Halloween, but it's not uncommon for kids to trick or treat sans costume.
5. Why are there a bunch of teenagers on my porch with bags? See the above note about costumes. Some teens here trick or treat until they are pretty up there in age. Something else you'll likely encounter is the parent who has their own bag for their own candy. Yep, it happens.
6. Hmm, anything else I should know? I'm glad you asked. Let's talk transportation and Halloween party safety.
A. If you drive on Halloween please watch out for others. Kids in costumes, and for adults who may have had too much to drink (or can't see well in their masks) are going to be everywhere this weekend.
B. Cabs are hard to get on big Halloween party nights. Keep this in mind when making plans.
C. Metro runs, use it. Seriously. It's cheap, and probably faster than a cab. Alternately you could just stay close to home.
D. Keep your pets inside. Kids (and drunk people) aren't always nice to animals. Plus, your dog might escape when someone opens the gate hoping for candy, or he could bite a kid. We're also not so far removed from July 4th. Face it, someone still has leftover fireworks.
Posted by inked at 12:54 PM

Thank you for the reminders!

Really? Saturday and Monday, but not Sunday? What's up with that? Sounds weird but I'll take your word for it.

If you have pumpkins out they will most certainly get smashed....so be ready to clean that up. It's the lack of good parenting in his neighborhood ....

Hey, I smashed pumpkins throughout my teenage years, and I had great parents! :)

I've decided to hand out rice cakes and life lessons this year instead of candy.

smashing parents has nothing to do with parenting. i grew up in a middle class neighborhood in the northeast.....and we all smashed pumpkins. also, in the 6 years I lived in this neighborhood I've never had a pumpkin smashed.

some additional tips:
(from news.yahoo.com/washington-d-c-halloween-laws-regulations-184600306.html?bouchon=511,dc)

Paint them, don't mask them

Unless in a masquerade, remember the D.C. laws do not allow people 16 years and older to wear masks that hide, conceal, or cover any portion of the face. The Metropolitan Police Department recommends using non-toxic and hypoallergenic face paint and avoiding masks for Halloween.

@poo
Screw what the law says. I'm wearing a mask. My pagan beliefs require that I do so on Halloween therefore any attempt to arrest me is a violation of my freedom of religion.

My religion also dictates that all domiciles must be covered it ceremonial 2 ply. Cthulhu commands it!!

Unfortunately our pumpkins have been either smashed or stolen for the past three years straight. This year I am not leaving them out overnight!

my pumpkins have been stolen for the last two years. Not putting out one next year! :(

I leave the light on but don't answer the door. I snicker a little each time the door bell rings.

lol folks take their pumpkins quite seriously! it's halloween. let the kids have fun...even if it costs you a $6 pumpkin

The yahoo article didn't correctly relay the mask info. Masks are allowed to be worn, just not with the intent of intimidating someone. I'm sure the police would rather people don't wear them, but it's not technically against the law.