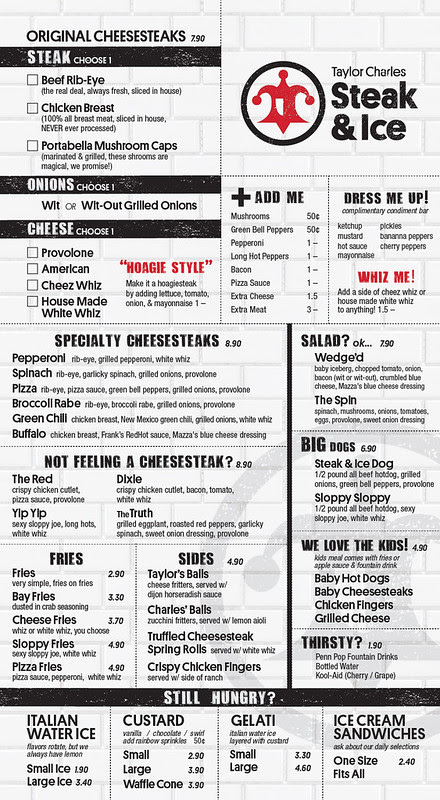 finally, so Im gonna walk up to the counter and say 'wit, wiz' and get what I want. they need a sign about only ordering in English to be legit tho.

well there not going to have the AMOROSO ROLLS SO ITS NOT AUTHENTIC...POINT BLANK PERIOD it will be just another place that sell steak and cheese NOT cheesesteak

Amoroso rolls are overrated -- half the good places in Philly have abandoned them of late. Geno's still uses them; but Geno's is the worst cheesesteak in Philadelphia.

I really think the new menu from Taylor folks will really stretch them. They have perfected the Taylor menu and execute abotu 75 percent of the time. I am worried that their brand is starting to be overrated due their fast growth in the city. The H Street location is OK where as it used to be great. Lets hope they execute this new place. I am big fans of these guys so hope it works. I will be there on the 12th!

Yeah -- I'm really rooting for them too, but I've noticed that their quality has definitely gone down over the years. Still good -- no longer 'great'.

It was a *really* sharp decline when they started using the new (local) bread-baker. The rolls simply aren't as good as they used to be.

It was a *really* sharp decline when they started using the new (local) bread-baker. The rolls simply aren't as good as they used to be.

I disagree. While I liked them okay, most of the people I knew were split between thinking the old rolls were okay and those who thought they sucked.

Were the old rolls "Amoroso rolls"? Because if they were, I think some folks are overly influenced by their memories of temps perdu and are incapable of objectivity.

It says they love the kids so I want to suggest adding milk to the menu and 100% pure juice instead of, or in addition to Kool-Aid.

Taylor is fine but they don't have many options. For example you can get a sub "with or without cheese." Cant you even have two or three cheese options?

They are also obviously losing business to the neighbor next door. For $9.50, H and pizza sells a pizza with anything you want on it. At Taylor, you spend 11 on a sub with less than the standard options of any basic deli.

Speaking of pizza, there was a great pizza truck that used to park in front of Taylor. Taylor tweeted some nasty comments about "hoggie parking only." It is kind of ironic that another pizza place is now taking half of their business.

There are some positives:
At least they now have mayo (I know, everyone doesn't like mayo but it is a very basic option). The rolls are a little better than they used to be. They are generally polite and I like that you can see the food being made.

DC Slices is not a "great" pizza truck. Their slices were mediocre at best and resulted in a TON of trash on the streets.

Taylor is a little more expensive than H&pizza (and don't get me wrong, I'm a huge fan of both) but I find myself fuller when I'm done (and usually have leftovers available for lunch the next day with a 12 inch hoagie.)

And it isn't ironic that a pizza place steals some business when they didn't like a pizza truck out front. That's not what irony is.

Claiming something's NOT ironic when in fact it is... now THAT'S ironic.

First, we love the Taylor Gourmet Stores. Have been customers since the first one on H St and frequent all of them for the Sarcone Rolls and Philly Style Sandwiches so we were excited to read in the Washingtonian about the newest venture "Steak and Ice". We drove in to DC from Md just to grab a couple Philly Cheese Steaks tonight.
It wasn't crowded at all, and we walked right up to the register to order and were greeted cordially. From there it went downhill. We ordered two Philly Steaks with Provolone, grilled onions and mushrooms, and Mayo. One with hot peppers. SPECIAL REQUEST "PLEASE DO NOT OVERCOOK". As we waited for our order to be filled I watched as the cook put the sliced Rib Eye on the grill and I again asked for the steak to not be overcooked...his response was a nod and smile. As he watched them cook it was obvious that they were burning crisp on the bottom. I again asked him to please not overcook them. He started working on ONE steak, adding onions and mushrooms, and still cooking it more (all the while the other one was crisping even more because he had not touched it yet). I asked him to please take it off the grill because it was now Well Done and he finally put it in the bread. They did not put Hot Peppers on it as we had asked and proceeded to wrap it up. He then turned his attention to the other steak which was now crispy and continued to overcook it. Then added the cheese, onions (forgot the mushrooms), then they proceeded to put lettuce and tomato on it (they refer to that as "Hoagie Style" which I had never mentioned when ordering).
I can understand screwing up an order when it's busy.... I can understand overcooking when it;'s busy, but there was one other sandwich cooking at the same time. When I pointed out that they had messed up and why, they did offer to redo ONE of the sandwichs and I declined because we were taking them back to Maryland to eat and I didn't want the other one to be cold (besides it was cooked Well Done also)
Great disappointment from what should be a great addition to their other stores. Will probably go back to Philly for our next cheese steaks!