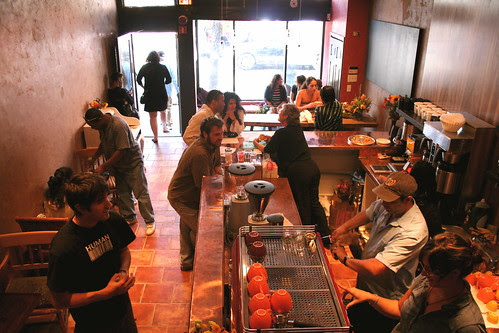 I received the note below, from Frank Hankins of Sova, earlier tonight. Sova succeeded R & B Coffee at the 1359 H Street location several years ago. Since that time Sova has served as a central check-in point for the eastern end of the neighborhood. That is the traditional role of coffee shops on such corridors. They are not only a gathering place for local residents, but also a first stop for those considering opening a business along the H Street Corridor. Coffee shops are incubators of sorts. Sova fulfilled these traditional roles, but also ventured into the cocktail bar scene, offering libations both familiar, and previously uncharted.

Dear customers, friends & neighbors,
After 5 plus years in business, SOVA will cease operations after close of business next Sunday, the 17th. There will be an ownership change, and I'm certain other changes with be forthcoming. Between me and the new ownership, we'll try to make the transition as seamless as possible. Customers will still see the same faces behind the coffee bar, and the bar upstairs will be closed for a short time while licensing issues get resolved.
We had some great times, but there were also some very difficult times over the last 6 plus years since I moved into the space. In a nutshell, we opened when H St wasn't hip at all. Running a business 7 days a week, morning, noon, and night took its toll financially and otherwise until we could grow a sustainable customer base, and it's still developing. I wish the new ownership well, and I hope the neighborhood gets what they want. I was very proud to be one of the first newer businesses to open on H St, but I paid the price for getting here early. Especially having to deal with the 3 plus years of construction on the street.
Most importantly, I'm going to miss all the great people that became good friends. Thank you for your support over the years.
You stay classy, H St. I'm out!
Happy trails,
Frank Hankins
Posted by inked at 8:32 PM

sorry to lose a pioneer business.

Thank you for all the years Frank..... Sovas ala Frank will be missed.
Roxanne

this is very sad...I feel for him...running a small restaurant is no joke and the dc government does not make it easy. they just take, take, take.

I hope it continues to be called Sova. Frank, I hope the sale of the business means you're getting something out of the deal instead of just dumping the business.

Thanks for hosting bluegrass shows regularly! I loved your place, we'll miss it.

Hopefully, the new owners will continue Bluegrass Thursdays. It's one of the most successful nights there, a great opportunity to regularly hear live music on H st., and pays homage to D.C.'s sometimes forgotten mountain music heritage.

Always enjoyed the staff here, even though it could get slow if there was a sudden influx of customers. hopefully the transition will be smooth and hopefully they will get in some better pastries!

I hope the new owners clean the place up.

Thanks for taking a chance on our neighborhood Frank and in doing so helping us build a stronger community.

Thank you Frank. You made a great contribution to the neighborhood. SOVA provided a meeting space for many groups to hash out how H Street was changing and to chart the future. However, its sad that SOVA will no longer be part of the future. Thank you Frank!!!

Will definitely miss Frank and the old Sova. Early investors and a place like that brings a lot to the development and cohesiveness of a community.

I do hope the new owners don't throw away the good while they invest in an update. They have a foundation to build on, even if it may need fresh paint and reupholstered couches.

Thanks Frank. We were so glad when SOVA opened. Loved the friendly vibe. And SOVA was a great place on H Street if you had toddlers. Lots of terrific kids music shows there over the years. Many thanks.

Adding my voice to the chorus of "I hope the new owners don't change much and keep bluegrass night!"

Sova Tuesdays will forever have a place in the hall of fame.

thanks Sova...visiting your shop five years ago was a important factor in deciding to move from NW...it made us believe that the neighborhood was on the upswing.

We will really miss this place, I hope Frank is going to make a bit above the breakeven point on this deal.

Feeling some serious grief, here. Sova's been one of the best parts of life in the Atlas District for me. My seven-month-old son has been there more times than he's been anywhere except home, I think. Selfishly, I'm hoping against hope that whatever comes next stays awesome (and keeps using Inteligentsia coffee!). But even so, I'll always be grateful to Frank for making such a great place to get a traditional cappuccino. My warmest thanks.

This makes me so sad! When we remodeled our house a few years ago I told the contractor to go to Sova for inspiration. I loved the look and feel of this place! It is disapointing that this and the Red and the Black and places with real character keep getting run off H St

so, you have 20/400 vision, watch the Unovision version of friends w/o contacts in, and have a deep affection for dust? your Contractor must have been one smiley dude during that project.

Is that what happened? Or did they just not find a way to turn a consistent profit as have other businesses we like and patronize. This isn't a knock on SOVA or Frank or the Red and Black. It's reality. Some businesses suceed while others fail.

Alternatively, we could redistribute some more of your personal income (along with more of everyone else's income) to bail out any business on H St. that can't find a way to make a profit by delivering a good or service that the consumers demand.

Oh wait, we already do that with the H St. grant program. Nevermind, carry on.

Wishing you well Frank. I wish I could stop in one last time for a coffee while it was still "SOVA".

All the best in your time off and next venture!

h street til the day I die. screw capitol hill