Double Shooting in Trinidad This Morning 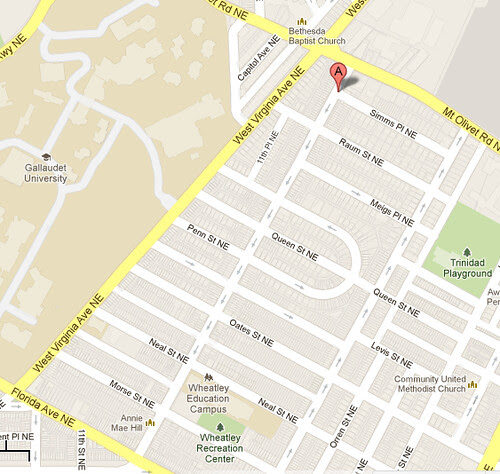 MPD sent out two text alerts indicating shootings a little before 8am this morning. I am assuming that they are related since the locations are one block apart, and the time frame is so small. [UPDATE: WUSA9 confirms that it was a single shooting of two male victims on Raum. One is in critical condition after suffering a gunshot to the chest. The other victim was shot in the leg. MPD says the shooter was a black male dressed in all black clothing with a black mask. No motive is known yet. Please keep the victims in your thoughts. I will update as more info becomes available.]

The victim who was shot in the chest has died. MPD reports that they have arrested a suspect.


Arrest Made in Homicide: 1200 Block of Raum Street, NE

(Washington, DC) — Detectives from the Metropolitan Police Department’s Homicide Branch have announced an arrest in the fatal shooting which occurred in the 1200 block of Raum Street, NE.

On Wednesday, May 1, 2013, at approximately 7:39 am, officers from the Fifth District responded to the 1200 block of Raum Street, NE for the report of a shooting.  Upon arrival, they located an adult male suffering from apparent gunshot wounds.  DC Fire and Emergency Medical Services personnel transported the victim to a local hospital where he succumbed to his injuries and was pronounced dead.

The decedent has been identified as 35 year-old Thomas Terrell Jamison of Southeast, Washington, DC.

A second individual was located in the 1200 block of Simms Place, NE suffering from an apparent gunshot wound.  DC Fire and Emergency Medical Services personnel transported the victim to a local hospital.  After his was treatment and release from the hospital, 43 year-old Kenneth Brown of Northeast, Washington, DC, was arrested and charged with Second Degree Murder While Armed in the shooting death of Thomas Terrell Jamison.

One of the guys died.

He could not retreat from his responsibility in this accident.
cheap nfl jerseys