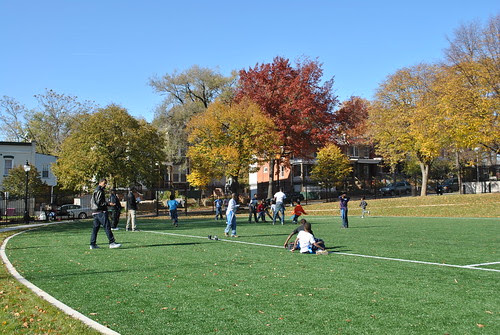 A reader writes in hoping someone might have found his daughter's purse.

My daughter and I were playing soccer at Joe Cole Recreational Center. She always brings her brown purse whenever she goes out, but she put it down while we were playing. Unfortunately, the purse appears to have gone missing, as it was not where she left it. We scoured the field and found nothing. The purse only contained a children's book and a Metro farecard, so I was going to just consider it a lost cause after being unable to find it at the lost and found in the recreational center next to the field, but I figured I would reach out to the Frozen Tropics community. Maybe someone thought it was abandoned and picked it up to hold for the owner? Perhaps I am naive. Any suggestions on how to locate it would be helpful. It has these (slightly faded) white Native American markings on it. Fairly distinctive. It was lost over the Memorial Day weekend. Again, I thought it was a lost cause and was going to give up, but thinking about it still bothers me slightly, even now. Trying to locate a photo of it.
Posted by inked at 4:50 PM