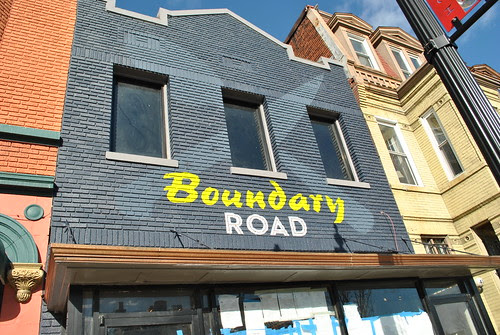 Boundary road right after it got a paint job

If you are at all a fan of DC specific writing (or crime fiction, generally), you are likely familiar with George Pelecanos' neo-noir novels. You may also know him as a writer, producer, and story editor, for the Wire. I know that I have devoured several of his books. It turns out that our own Boundary Road (414 H Street) will appear in his upcoming work The Double. This is probably the coolest news I've heard in a while. I can't wait to buy this one. Here's the excerpt that he posted on his Facebook page:

"Lucas swung onto his saddle, put his feet in the clips, and took 14th all the way downtown, then cut over into Northeast via K Street, and over to the 400 block of H, where he locked his bike to a post and entered Boundary Road, a restaurant on the edge of the thriving Atlas District. Unlike the riot corridors of U and 7th Streets, which had benefited more quickly from the construction of the Metro and its subway stations, H Street had taken forty years to be reborn after the ’68 fires. Lit-up business establishments and the sounds of conversation and laughter on the street said that it was flourishing now.

Boundary Road was an airy two-story space: brick walls, a distinctive chandelier, low-key atmosphere. Lucas had a seat at the bar. The night manager, Dan, frequently played reggae and dub through the house system, an added attraction for Lucas. Plus, he could come as he was—tonight, black mountain-bike shorts and a plain white T-shirt—and not feel out of place."

I was first alerted to the mention by a Facebook post from Boundary Road.
Posted by inked at 12:29 PM

Pelecanos also uses H Street as a setting in a past book, one that takes place in the 1940s or '50s or something along those lines. Can't remember specifically which one book it is, but the characters go to a nightclub on H Street.

Same goes for Barracks Row. A bar there plays a somewhat crucial role in one of his books set in the '60s or early '70s.

There is a place called the Spot coming to H Street. I think Pelecanos also has mentioned the 24 hour Subway located in the Florida Market.

K street? i would take 14th down from the Heights to T Street, then take that to the Met Branch trail ...