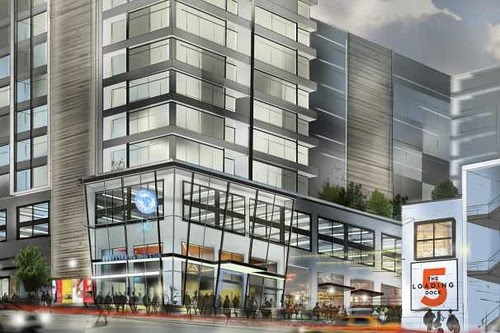 Lately it seems like you can't read the paper without stumbling across a big news story for our area. First it was Whole Foods coming to H Street. Then it was a ten screen Landmark movie theater in NoMa (WaPo). Now it's an Angelika Film Center in Union Market (WaPo). Though this is certainly a big change, it doesn't come as a total shock. A little over a year ago I spoke with one of the Edens team members behind Union Market (1309 5th Street) & he mentioned that they'd love to see a movie theater there. Plus, they have held several outdoor movies projected on the side of Union Market. The Washington Post article describes the location of the new theater as immediately north of Union Market. I imagine that means it will sit on top of the old market sheds site. The sheds are the earliest iteration of the Florida Market at its current location. They were erected when the vendors first relocated due to the demolition of the old Central Market to construct the National Archives. The new building will feature housing above the movie theater. Delivery in 2015. The times, they are a'changing, no?
Posted by inked at 9:31 AM

Those apartments/condos will have an impressive view of the Capitol dome. Every time I come down 6th Street from Home Depot, I always think that that location would be a great location for a dense residential building. I'm glad to see it's finally coming!

Maybe this development will help push the NPS to do something with Brentwood Park...

I think it's very sad what Union Market has been reduced to. I remember when you could buy 5 sponges for a dollar.

Neighborhoods change, cities change. This is definitely a change for the better.

Well, I don't know that I would be willing to buy a condo there. The stretch between H st., and the market has a long way to go. Also that area at night is pretty *scary*. Although I suppose it's not as scary as The area NoFlo like Trinidad.

Yes the cars driving on Florida are *scary* and let's not forget about the terrifyingly friendly residents and Gallaudet students on the streets! What's next lions, tigers and bears oh my!

Honestly, would you walk around there alone at 11pm? I think not.

Anon 8:47, I've been walking around the neighborhoods north of Florida Ave and east of Bladensburg Road for 8 years now. I have street sense and I'm aware of my surroundings but I am not usually scared. Maybe you should let go of some of your biases.

Maybe you should acknowledge statistical reality. I like it here, I live here, and I still know its much likelier that I could be mugged here than in Bethesda or Old Town. Do I move there? No. Am I cognizant of reality? Yup.

"I still know its much likelier that I could be mugged here than in Bethesda or Old Town. "

YOu're statistically more likely to get mugged anywhere in DC than in Bethesda, so why don't you move there and leave the city to people who can appreciate it without fear.

I, too, have walked Florida at all times of the night. My only complaint with Florida is that the sidewalks are so bloody narrow on the stretch across the street from Galludet. Who the heck decided to make the sidewalk so narrow on that stretch? You have to play dodgeball around the lightpoles. God help you if someone's coming towards you pushing a stroller, you darn near have to step onto someone's porch steps to let them pass.

There are statistically significant differences in terms of street robberies in different areas around DC. Therefore saying all of DC is more or less risky is not all that insightful since Friendship Heights and Trinidad can't be confused for each other in terms of street safety. Also, one can choose to live on H for the many reasons one would do so and still acknowledge that its not as safe as posher areas around and outside DC.

I've been in the area for 10 years. I walk/bike through that area all the time. It's really not that scary. Desolate, sure. This project will bring new life to the area and that's good.

Really, you'd walk on Florida Ave at 1am with your baby in a stroller? I call billshit....because it's too damn *scary*

This theatre is so exciting!!

Any news on the rest of the Union Market development? The gateway area on NY Ave is truly amazing - we are shocked to really see this development now come along Florida Avenue! Its really exciting!

Any news on the widening of the sidewalks of Florida Ave?

That whole area near Union Market has so much potential for development and I'm hoping some retail!!! Lou Lou Jewelery, Macys, :-) a girl can dream!

HOORAY for our neighborhood!!!

oh - and in addition to the retail (while I'm making a wish list!) PLEASE can we have a dog park and playground!!!!! That are would be great for "social outdoor space".

Fingers crossed this will be part of the developers plan!

"The DC Department of Transportation (DDOT) has initiated a multimodal safety and planning study of Florida Avenue, NE. Focusing on the Florida Avenue corridor from New York Avenue to H Street/Benning Road (click here for study area map), the study will evaluate safety, streetscape, and operational enhancements to improve safety for pedestrians and bicyclists while ensuring all users have safe access within and through this important corridor."
http://www.floridaavesafety.org/

What I don't get is, as a criminal wouldn't it make more sense to go to a wealthier neighborhood to rob people. I realize this isn't the case in reality but I really don't understand why. I mean aren't people statistically more likely to have larger amounts of cash, nicer phones, jewelry, etc. out in Bethesda. Not to mention, some lawyer who bills clients $300 an hour is a lot less likely and probably less capable of putting up a fight over the $20 in his wallet than some guy around here bring home $10 an hour. Also, there are a lot more cops rolling around here in case you hadn’t noticed. Are these criminals just too lazy to commute more than 5 minutes to rob someone? Do they not know where the rich people live? Are they just too stupid to put this all together?

I really do wonder.

street crooks rob in poor neighborhoods because it's close and they know the area.

if you are from anacostia and ride up to bethesda, you don't know the alleys, the paths, the convenient back yards. Also you stick out like a sore thumb.

in SE, you knock over someone, you still hide in the crowds.

a skinny black male in dreads and jumps sticks out in bethesda.

Doug you give the criminals too much credit. You assume that they really plot an dplan the perfect crime instead of just running up on a random person. I was robbed in the neghborhood that I grew up in and it is not posh at all. They just assume that you have cash and hope that you have a nice phone or other things on you.

All of this talk about not being scared is relative. Some people aren't scared to die. Some people aren't scared to get robbed. Are the odds against you getting robbed in DC especially around these parts? Probably. Most people probably don't get robbed ever in their lifetime BUT there is a higher percentage than some want to acknowledge. I'm not sure why. It's still becoming even more fun to live and hang out here and just like before the trolley tracks were laid down there are tons of relatively good people who live in the area. Doesn't change the fact that there are a bunch of people who don't respect others and are willing to take what's not theirs and frequent this space as well.