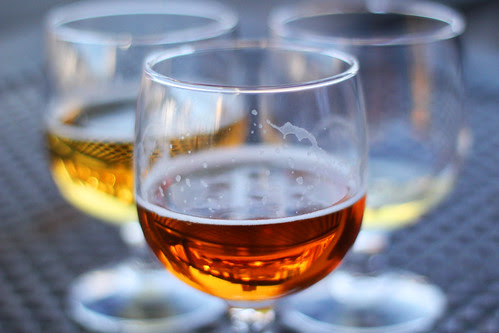 Beer Trio Horizontal, a photo by Lindsey Gira on Flickr
DC Brau, Atlas Brew Works, & New Columbia Distillery are all part of the Nerds in NoMa Local Brewing & Distillery night at 1200 First Street, NE on Tuesday, December 17 from 6-8pm. According to the announcement: "A panel of the District's top beer and gin connoisseurs will discuss what is on tap for the District: DC Brau's Jeff Hancock, Atlas Brew Works' Justin Cox, and New Columbia Distillers' Michael Lowe; Jonas Singer, Co-Founder of Union Kitchen will moderate the panel." You must RSVP for this (FREE) event.

This is part of the larger Lobby Project. The Lobby Project is "a new hub of activity, where you can connect, learn, use free wifi and enjoy tasty treats. A three-month pilot project, the Lobby Project is the brainchild of Harriet Tregoning, Director of the DC Office of Planning, and is being implemented by the NoMa Business Improvement District."
Posted by inked at 10:43 AM

Ticket for this are "sold out," but I have two that I'm not going to be able to use. If anyone would like them, I should be able to forward the email with the tickets.

Does anybody know what happened to New Citi Pizza on H Street? I think they've been closed the past couple of days.

Apparently, last night some dumbass on H Street drove into the front of the Daily Rider, broke a gas line, and got arrested. Someone took video from above:

Not sure what the crowd on the sidewalk is unhappy about.

Ann - do you still have those two tix? Would love to go. campy@gishpuppy.com