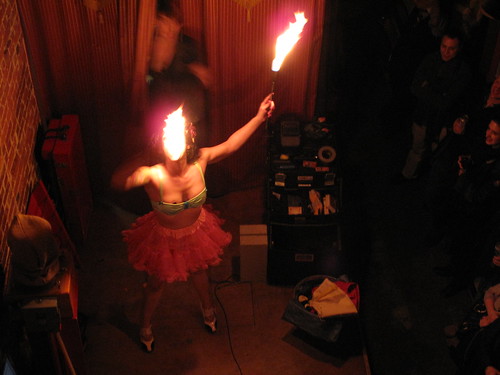 Once a hot destination spot on H Street, the Red Palace was the District's very own dedicated burlesque and variety arts venue. Originally known as the Palace of Wonders, its patrons pulled back the red curtain to walk into a sort of oddities museum. "Is it real?" patrons whispered as they passed such displays as the Fiji Mermaid, the uni-horned goat, and the elephant man. But the Palace was more than medical oddity eye candy, freaks, and sideshow. It was a place where artists rubbed elbows with Capitol Hill staffers and weekend warriors. The politics that so often dominate conversation in DC ceased to matter as ambiance and thrilling shows invited spectators to transcend their everyday lives and allow the enchantment of the sideshow to overtake them. Productions ranged from live entertainment to amateur comedy, from lawless aerialists to dazzling burlesque, from hot fire acts to thrill seeking sideshow. It attracted patrons from all over the world, played host to countless birthday and bachelorette parties, and delighted residents of nearby neighborhoods.


Palace Productions rose out of the ashes of Red Palace with the aim of branding alternative live entertainment in a city where DJ nights and the internet have been substituted for viable live entertainment. Steve Lambert (Rock and Roll Hotel) and Mel Afzal (Palace Productions), who worked together at the Red Palace, have joined forces to offer a space where alternative live entertainment is an igniting experience. The showroom of the Rock and Roll Hotel is similar to that of the Red Palace, with stage size that will allow for bigger shows and a slightly larger room capacity.  Ms. Afzal looks forward to re-branding variety arts on H Street, saying "There has been a hole in this kind of entertainment on H Street since the closing of the Palace, it is nice to bring it back home."

Here's how the organizers describe the show:

Sizzlin' Hot Burlesque!
Summer in the city is HOT HOT HOT! Cool down at Rock and Roll Hotel with Palace Production’s Sizzlin’ Burlesque. Our blazing cast is ready to cool you off burlesque style, a little tease, a little sultry and a whole lot of fun! Sizzlin Burlesque is a summer treat to beat the heat with burlesque, drinks and you. WARNING: Temperature of the show is scorching! One Show only!

Really. If the Palace was sooooo successful, why isn't it still in business?

the landlord cancelled the lease, the landlord wanted to open their own restaurant (Vendetta) and
at that point the red palace operator didn't see a good opportunity on H Street. It's a pity,
I thought they could have set up on Benning Rd or
even on Minnesota Avenue.

Uh wow Pat, that is just compelety wrong information. Where did you hear that. Actually, the owner of the Red Palace, amongst other H st bars, Joe Englert, decided to close the place to open an Itialian themed restaurant. Google it.

the red and black and Palace of Wonders was great back in the day when there were only 3 other bars, but now those 2 just can't beat the competition

circus shows might do well every now and again at Rock and Roll, but I don't think they want to bet their bizness on it if they want to do it every night

Who wrote this ridiculous post? Red hot destination.....not so much boo.