Arboretum to Re-Open to the Public 7 Days a Week 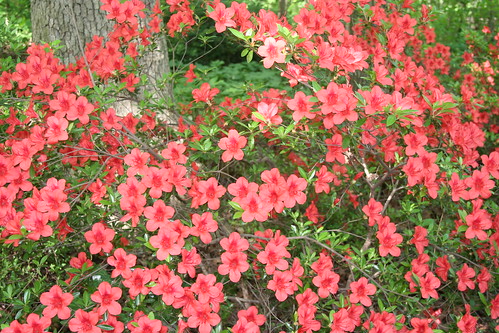 Budget cuts in 2013 forced the Arboretum to scale back its public hours, but the announced yesterday that they will resume normal hours and days (8am-5pm for the grounds and 10am-4pm for the National Bonsai & Penjing Museum) beginning April 14th.  You can read the full press release below.

U.S. National Arboretum To Re-Open to the Public Seven Days A Week

Schedule Resumption Possible Through Friends of the National Arboretum Donations

WASHINGTON, April 2, 2015 — On April 14, the U.S. Department of Agriculture's (USDA) U.S. National Arboretum (USNA) will once again be open to the public seven days a week, its original operating schedule. USNA continued a full research schedule but reduced the public schedule by three days a week in 2013 due to reduced funding, closing to the public Tuesday through Thursday. The Arboretum is operated by the Agricultural Research Service (ARS), USDA's chief intramural scientific research agency.

"We are very pleased that the U.S. National Arboretum will return to its normal operating schedule on April 14," said Chavonda Jacobs-Young, ARS Administrator. "In addition to the vital plant research conducted there, the Arboretum is also a source of relaxation and enjoyment for the public and visitors to Washington, D.C. We are thankful for the support of the Friends of the National Arboretum in helping us to restore the Arboretum's normal operating schedule. It is a great example of well-functioning private/government partnership benefiting the public."

Friends of the National Arboretum (FONA) is the principal private, nonprofit partner of USNA. FONA began raising funds following the 2013 schedule reduction to facilitate resuming USNA's seven-day schedule. The funds raised by FONA will help pay for custodial, security, and public information services for the three days of operations over the next three years.

The 446-acre Arboretum is USDA's research and education facility and a living museum. The Arboretum enhances the economic, environmental, and aesthetic value of ornamental and landscape plants through long-term, multi-disciplinary research, conservation of genetic resources, and interpretative gardens and exhibits.

It is dedicated to serving the public and improving our environment by developing and promoting improved floral and landscape plants and new technologies through scientific research, education programs, display gardens, and germplasm conservation.

This year, the Arboretum is also home to a nesting pair of bald eagles, the first since 1947. Staff first noticed the nesting pair in early January on the south side of Mount Hamilton, in the Arboretum's Azalea Collection, watching the pair make trips back and forth to the nest site. The eagles' behavior changed towards the end of January, when one started sitting on the nest at all times, while the other searched for food to feed its mate. This was an indication that the pair was now caring for eaglets. It is unknown at this time how many eaglets are in the nest.

The USNA is taking steps to protect the nesting pair of eagles and minimize disturbances. People, noise, and related distractions in the vicinity of a bald eagle nest can cause the nesting pair to abandon their nest and eaglets. USNA has restricted access to an area within approximately 660 feet around the nesting site during the critical nesting period, ending around mid-June.

Each season provides new experiences for visitors. Spring arrives with the appearance of woodland wildflowers. From magnolia blossoms to miniature daffodils to cherry blossoms, fragrance graces the grounds. Summer brings daylilies and crape myrtles, welcoming the heat of summer with showy, resilient blooms. In the fall, tree leaves transition from summer green to a range of rich yellows of tulip poplar and hickory to the bright red of black gum and the purplish red of sweet gum and dogwood. While many think of winter as cold and remote, it also brings calm and quiet. Snow and ice transform the gardens into a jeweled landscape. The 'Sparkleberry' hollies (developed by scientists at the USNA) sparkle with brilliant red berries.

There are a number of specialized collections at USNA including the Asian Collections, Fern Valley, The Native Plant Collection, and the ever-popular Azalea Collections. The public is encouraged to visit the USNA Web site to learn more about hours of operation, visitor services, collections, and upcoming USNA events and activities.

The Arboretum need not be poor. It could charge an admission fee as do national parks and other world class arboretums and gardens.

they should grow weed and sell it, plenty of space to have a couple fields there

It could actually cost them more to collect admission fees and process them. It would also cause other problems of entitlement. Some parents are already upset because the security guards don't allow their kids to fly kites, climb trees, ect; Let dogs off leash; ect. If you want to help the arboretum out, join FONA, or volunteer.