Someone Threw a Brick Through an X2 Bus Window [UPDATED] 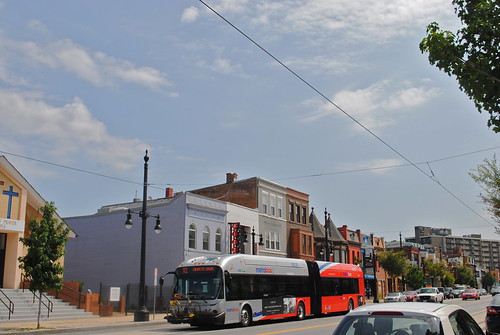 The X2 bus on its route down H Street

Twitter user @JadeMStone sends word that someone threw a brick and shattered a window on an X2 while the westbound bus was stopped at 19th and Benning. She reports that there were few on the bus at the time (only maybe seven). No one was injured, but the passengers (who then boarded the bus she was riding) told her there was glass everywhere. The X2 is among the busiest bus routes in the District.

HillNow.com reports that three youths (one of whom threw the rock/brick) were stopped by MPD and may face charges.
Posted by inked at 10:18 AM

AND THIS... is why we can't have nice things. maybe the riots in baltimore are spreading...

If it's one thing that part of town is known for it is great parents.

"Let ye who is without sin throw the first brick."
~Yeezus of Benning Road

This is the absolute worst bus route in DC. It is horrific. I have been on that bus numerous times and have gotten off and walked the remainder of my route home because the people riding the bus were horrible and ratchet. Bless those drivers who have to deal with this foolishness. Service needs to stop going into certain areas. Maybe that will force the community to take a stand against certain types of behavior which makes it difficult for people to take the damned bus. smh

Anon 4:32pm -- what, exactly and specifically, do you have in mind when you imagine such a decision "forcing the community to take a stand against certain types of behavior"? What are you envisioning? If you take away the only way some people have of getting to work, that will cause the people who've never done anything wrong and who lose their jobs because they lost the ability to get to work to . . . .do what, exactly?

I sympathize with your frustration with the X2 -- I won't ride it, myself -- but some people who haven't done a damn thing wrong don't have much of a choice. What should those people have done in this case? Use their ESP to ascertain that the kids were going to throw a rock once they got off the bus, and tackle them as pre-crime enforcement? What, specifically, is it that you want the decent folks on the bus to do?

as someone who is soon moving away from the city after years of riding the X2 and putting up with the foolishness of the idiots and assholes on that bus, I can only say....yippee!!

Let me guess b/m as all are of the crimes.

are you kidding me? these are the punks that are going to decimate the streetcar! read the words emanating from my mind and coursing through my little typing fingers: *this* is why we can't have nice things.

we should just shut down all mass transit to and from SE (& parts of NE) and put checkpoints on the bridges. unless you're on your way to a low-paying job serving me lunch or cleaning my office, i'd prefer you stay on your side of town.

Look, I need the X2 as much as anybody, I use it to commute and stuff, and I don't want anyone throwing rocks or bricks at it. But all you guys are totally wrong about it being "nice". What you meant to say was, "This is why we can't have *things*".

They say all their crimes against the working class is a result of years of systemic oppression. There is no claim of any responsibility on their part for the damage caused by their so called anger and outrage. It is time for the working educated people to wash their hands of and segregate those who rage against our democratic system. Wall them in their burnt out reservations and let the bloods, crips, and guerilla family impose their own system upon those who want no part of ours.

The behavior of the oldies is something I will never accept. I don't care if you call me a gentrifier, I am not throwing bricks at people.

Maybe we can start a petition or send letters to our reps about stopping X2 past H.

I'm always hesitant to read the comments on this blog, because it reminds me of just little empathy some of you possess and how little you understand about the communities you're moving into and the plight of many of its residents, including its children. The racially charged and flat out racist comments are sickening. Is this DC 2015? Or Montgomery 1964? I want to be clear. I'm not and don't make excuses for behaviors that lead to assaults, property damage, or criminal activity, and I know it's tough not to generalize or stereotype. But don't get so used to it that you end up becoming the ultimate bigot. Show of hands...how many of you who tend to post the "those people" emails have ever reached out to any of these children? Offered to mentor them? Gone to the local schools to offer to tutor any of them? YOU decided to move to Trinidad and "Capitol Hill." Did you research the history of the neighborhood? Good and bad? Or did you just decide to take advantage of the real estate market of a struggling neighborhood? The time you spend on this blog spewing stereotypical and racist remarks could be spent first thinking about the cards you were dealt and how you can use what you benefited from that hand to help better or uplift your fellow man/kid. Until you do, I'll continue to read the comments, because I need to be aware that not all of my "neighbors" are what they appear to be.

Of course, once again, black "gentrifiers" like me suffer the most. I am disgusted by the daily coonery, but likely considered to a coon by 95% of the white folks along the H street corridor. You can all go to hell.

Well welcome to 2015. Your justified outrage and I cant take it anymore...You should have mentored Mike Brown and all the black youth who are frustrated (Since when is any teen not been angry or frustrated!?)

The reality is the folks you are angry at are just as capable of anger and when they start throwing bricks back and they will, the only result will be another Ukraine or Lebanon ( google it) just sadness and more loss no progress ever. Yet history shows some people want that and don't care about you or yours

Hate to point out the obvious but.


You did cast the first stone !

Who throws a brick at the bus they themselves may ride? Of course, last year some dirtball fired
a couple of bullets at the X2...

They never got the perp, which is sad.

Actually it's not my responsibility to mentor these hooligans. I hear about the plight of teachers being underpaid and the plight of the working class here but none of them does any sort of mentoring or educating of the youth. Responsibility to educate and mentor is everyone's responsibility but mostly the schools and parents. And as a tax payer buying a more expensive property and thus paying more taxes I've done more than my part. As an educated black man living in NE for the last 4 years has finally explained to me why segregation existed in the U.S.

Teachers used to teach and discipline, but now parents sue and protest anytime someone tries to educate.If we prevent teachers from doing their jobs and parent dont bother then the result is
what you have

No, it's not your responsibility to reach out and make an effort to understand anyone at all. It's also not your responsibility to make absurd racist generalizations, either. But you don't seem to have any problems whatsoever ignoring that lack of responsibility and being a racist fuck. So maybe it's not so crazy for someone to ask what you've done/haven't done to make the world better rather than worse. But since playing rhetorical games and warming yourself inside with the fire of your racist worldview is what really makes you feel good, that's not something you can consider, is it?

Great parenting going on around this area. Nothing like those upstanding citizens at the Starburts plaza and their kids to make the city a great place to live.

Family planning would solve almost every problem in our neighborhood.

Everyone on this blog of all colors seems to have an answer. Teachers, System, Economy, racism. How about we just blame those folks who are not civilized and break OUR Laws? Just like the trash in my own family. I can't raise their kids or tell them to clean up and act right. I just accept that they will suffer the consequence of their own actions and I don't make apologies for their tough lives. Stop apologizing and enabling those that harm us all.