Non-Fatal Shooting in the 1300 Block of Florida Ave 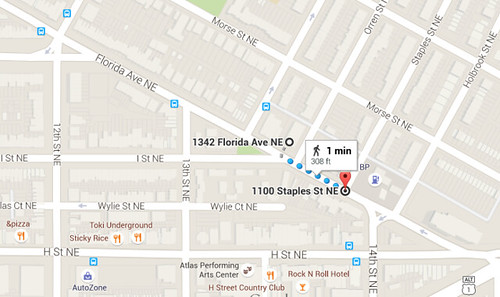 A man was shot in the leg last night about 10:30pm in the 1100 block of Staples Street. He made it to the firehouse located at 1342 Florida Avenue where he obtained help. This is in the Trinidad neighborhood.

Here's the original DC Alert that went out last night:


Here's a later email from an MPD representative describing the shooting:

Fifth District members are currently investigating a shooting that occurred on August 17, 2015, at approximately 10:30 pm. in the 1100 block of Staples St. N.E.  The victim sustained a gunshot wound to the leg.  The suspect was described as a black male, approximately 5’11, medium length dreadlocks, black T shirt, and riding a light blue bicycle.


As is always the case, those with information relating to this crime should contact MPD at 202-727-9099. Want to provide information anonymously? Try the MPD text tip line by texting 50411. DC Crime Solvers currently offers a reward of up to $1,000 to anyone who provides information that leads to the arrest and conviction of the person or persons responsible for an assault committed in the District of Columbia.
Posted by inked at 7:42 AM

"As is always the case, those with information relating to this crime should contact MPD" Hahahahahahahaha

Just like those people who know who shot the reporter a few months ago, I'm sure last night's witnesses will come forward right away.

wow! fire dept will come to your aid if you just show up at the fire station?!

That shooting was right by Capial Fringe. I hope Kathy Henderson doesn't used this incident to try and go after their liquor license.

What's been going on recently? Seems like theres a new story on gun violence every other day!

10:57,
The shooting did happen near Capital Fringe, but their bar wasn't even open yesterday, so I would say they are safe.

@10:57, there is also a convenience store and a gas station that reportedly sells synthetics on that corner and another corner liquor store corner of Trinidad & FL. Don't single out one other place of business that was closed at the time.