Wylie Street Garden Gets a Reprieve (for Now) 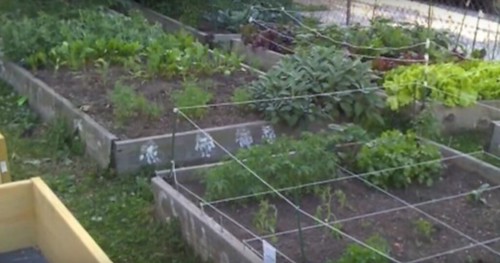 Wylie Street Garden (screenshot of a video by Paige Byrne)

The community garden at 13th and Wylie Street will live on for at least one more year. Kenneth Brewer, Executive Director of the H Street Community Development Corporation (HSCDC) has agreed to grant the growers one more season. Supporters of the Wylie Garden organized a campaign in September of 2014 when a large for sale sign went up on the property. According to those supporters, research showed that the garden could assist Department of Energy and Environment (DOEE) efforts to clean the Anacostia by mitigating storm water entering the combined sewer system. Those supporters also say the garden could play an important role in the community in the future, listing the following as possibilities:


Included below is a (slightly edited) excerpt from their statement:


Robert, a gentlemen that mows the lawn felt a presence while mowing and reflecting on the produce of his grandmother's garden in NE. How fantastic spaces on H can cause us to pause and recognize, like the Mulberry tree in the corner of Wylie garden natural spaces and things are valued and an essential.

The preservation efforts envisioned this space as a park for the people who persevered and passed through here or did not. The immigrants and shop keepers, the community of brick layers who lived on Wylie, Duke Ellington (rumored to have lived in an apartment), or the police who did not even cruise by in the 80's. Wylie garden, our last green asset along the H Street corridor sits just off 13th & H where people continue to pass through like Mayor Bowser opening the trolley, the marathoners turning right in the final stretch, and soon the customers of the open farm market, who also see Wylie garden as a resource.
Posted by inked at 8:24 AM

A house was on this lot that was condemned, and then torn down. Housing should be built there again. The place is an eyesore.

Ha a garden is an eyesore? Guess you really can't please everybody. Be careful there are places in America where you'll find grass around people's houses too. We should probably just rip all that up for some more beautiful concrete too.

I wouldn't mind if they put a playground there instead for the children.

Arguing between playgrounds or green space for gardening seems like a thing we should do to take the neighborhood to the next level.

Have these gardeners raised the money to actually buy the lot yet?

Probably not, I guess it's just easier to squat on other peoples land and try to tell them what they should be allowed to do with it.

as opposed to NIMBY, these folks are DIMBY - "Definitely, it's my back yard" or is it "Dis *is* my back yard!"?


Anonymous #1 Part of the garden is an eye sore! Former Danny Todds mngr is still on look out for new fence for free, so kind.
Anonymous #3 The squatting history started with the former Fishing School creating plot, but they relocated to Anacostia by Ty Pennington. HSCDC wants $900,000. I received one offer to help fund raise, but that amount scared them off.
Jesse: I checked into playground equip since half is grass, but community voted to campaign for mixed usage that would be open to more of community.
Poo Poolio: We totally know this is not our back yard, who owns it, who we pay mow it, which kids want $$ to weed it, how much HDCDC wants for it, how the waiting list continues to grow and that we take care of it even though we do not have all the tools.

The other ideas sound great, but just so you know if anyone tries one...the work to connect existing city resources is time consuming, challenging and obviously very expensive. I'd help any leadership on preserving potential community space and believe shared green space is worth every resident, child or dog~even neighbors with negative responses, in the long run the green space/ park space is important for everybody.

Thank you for all comments. How would we know who we tried to save green space for unless we communicate?