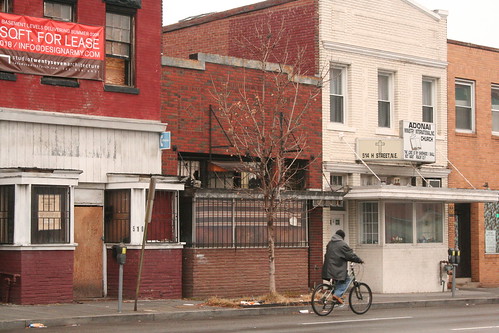 Michael Neibauer of the Washington Business Journal notes that 512 H Street has sold for $720,000 to an LLC associated with Getinet Bantayehu. If that name sounds slightly familiar it could be because he's been a part of Palace of Wonders (now defunct, but formerly at 1210 H Street) and Dr. Granville's (1238 H Street). Also from Neibauer, Clark Realty Capital sold the Flats at Atlas (1600 Maryland Ave) and the adjacent lot (set aside for a later phase) for around $95 million.
The Starbucks coming to 625 H Street has applied for a class "D" restaurant liquor license that would allow them to serve beer and wine. Any protests must be filed by June 6th, and the protest hearing is scheduled for September 7th at 1:30pm.

WTOP points out that New Columbia Distillers (1852 Fenwick Street) and Jos. A. Magnus & Co. (2052 West Virginia Ave) both walked away from American Distilling Institute's 2016 Spirit Competition with honors. New Columbia won Best of Category Navy Strength Gin and a bronze award with Navy for Green Hat Navy Strength Gin, a silver for Barrel Aged Gin with its Green Hat Fall/Winter Gin “Ginavit” XO, a bronze in the Fruit Cup category for its Summer Cup. Magnus won Best of Category Straight Bourbon Aged more than 5 Years, a Gold Award, and Best of Class Whiskey with its Joseph Magnus Bourbon. Both distilleries are located in Ivy City.

Chupacabra (822 H Street) is hiring servers, and is willing to train strong applicants.
Posted by inked at 10:33 PM

the atlas sold? i wonder why. they must of realized no body really wants to pay those high rates to live there and got out as quick as possible.

The Flats at Atlas is all rentals, maybe a large operator has bought it to add portfolio,
or maybe they are trying to sell it off for condos...

Now that the Streetcar is running, perhaps the rents will increase.

Wow, Starbucks is serving booze now. Both uppers and downers all under one roof!