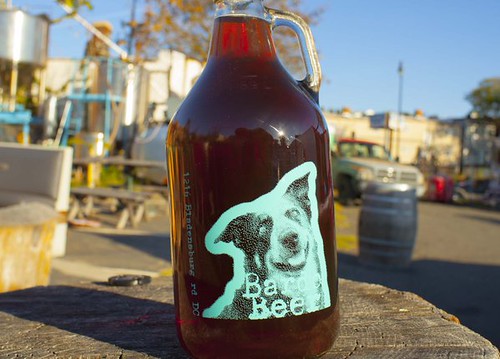 Barred in DC drew attention yesterday to the fact that the owners of Trinidad's Bardo (1200 Bladensburg Road) may close their location here if they are approved to open their new venture Bardo River Brewery according to their proposal. This appears to be related to conflict of interest restrictions in the DC Code, that state that "No licensee under a manufacturer's or wholesaler's license shall hold a license of any other class or kind." The issue is mentioned on pages 5, 91, and 92 of a 155 page transcript from the August 10th ABC Board hearing. Bardo noted in a tweet that the restriction simply means the same individual cannot hold both a manufacturer's license and a tavern license. Meaning that the Trinidad location would "NOT have to close." The transcript is not short, but it is both interesting, and a quick read. I've left a few highlight below.

Boardmember Short asking about whether having large tanks of beer pressurized at 15psi would make the new venture a potential terrorist (or drunken target shooter) target: "I’m on the south Capitol Street Bridge, I’m a little loaded, I just got my mind, I’m not thinking right, and I take a gun or a rifle and shoot down at those tanks. What’s going to happen to that tank? That pressure? So when you’ve got 750 people there, what’s going to happen when opens."

Oddly (or so it seems to me), Bardo's Stewart is familiar with stories about such tanks being shot, and answers: "It’s funny you bring that up, because my buddy worked at Dixie Brewing in New Orleans -- it got washed away in the hurricane. And people used to shoot his beer tanks all the time, and they would just leak, they would just leak beer, and that was about it."

This time the answer comes from Bardo's attorney Matt LeFande. "There’s going to be a lot of beer all over the place. You’re talking about one quarter of the pressure of a bicycle tire."

The Washington Post has a story on the NYC based Halal Guys who are opening multiple locations in the D.C. area, including one at 814 H Street.
Posted by inked at 7:33 AM

Good riddance. They are shitty neighbors, and make crappy beer.

their beer is pretty awful but i do enjoy their mad max, post-apocalyptic scene with random dogs wandering around and the constant din of sirens.

I like Bardo's. In fact, now that it's cooler, I'd like to head up there this weekend for a leisurely couple of beers and cornhole contest.

Cornhole, outdoor seating and flip flop wearing bros. It's the ultimate white people hangout in the middle of the hood.

I want the old Bardo to come back, because I loved it. If it came back in our hood, that'd be cool; but even if it was in the original location.

The jukeboxes there were the best anywhere in the world.

You dont like white people do something about it minority. You may want someone to explain that word to you. Why would you think that 85% of this country even cares about the problems of 15%. We are too busy working, raising families and obeying laws

It's disgusting that Boardmember Short gets to impact major economic development opportunities. Is it selective ignorance or just plain stupidity. It doesn't take that much thought as to all the other infrastructures that would be more "dangerous", ie - utilities, building mechanical/electrical equipment, etc. It's sad that time and money has to be wasted to deal with someone who is so clearly against the development or who is just plain dumb.

Shooting at a pressurized tank full of beer? Blowing one up with plastic explosive? This actually sounds like a pretty good premise for a Mythbusters episode...