Something You Should Know About ANC 5D03 Candidate James Q. Butler 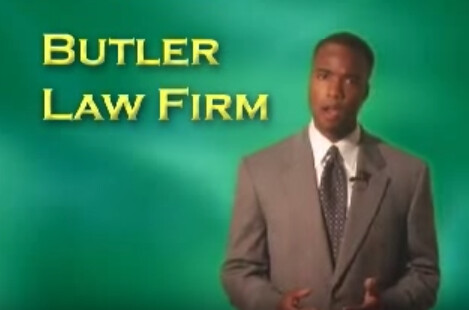 I've wrestled with this information a bit (because much of the information is from a while ago), but ultimately decided it is important that I share it because I think it goes right to the heart of a candidate's ethics and fitness for office. It's something that a little casual Googling might miss, and Mr. Butler is lucky enough to appear first on the ballot in the race (a big deal in an ANC contest where voters may be less familiar with candidates). 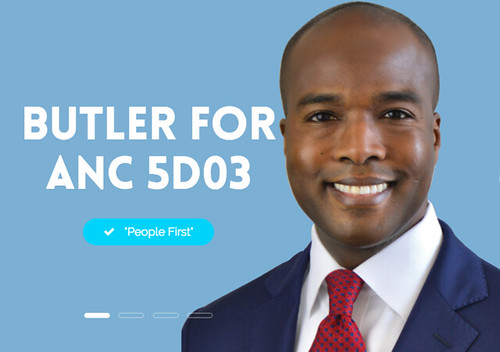 James Butler has a nice shiny website. On that website he has a long section on his past legal work, which is immediately followed by the text "Presently Butler’s work is focused on representing clients in Civil Rights matters before the Equal Employment Opportunity Commission (EEOC), DC Office of Human Rights, and the Merit Systems Protection Board (MSPB)." You don't actually have to be an attorney to represent individuals before the bodies mentioned just above. That's key, because Mr. Butler is not an attorney. He used to be one, but he was disbarred on Nov. 5, 2009. 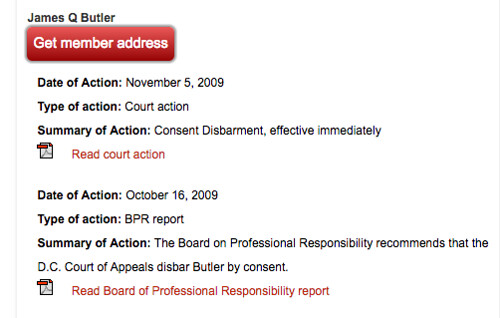 If you are wondering how I can be sure it's the same James Butler, let me explain. The email address and phone number you can get from the DC Bar for Butler ("jqbutler1[at]hotmail.com") are the same as the ones he provided to the Board of Elections. The home address for him listed on the bar website is an old one. 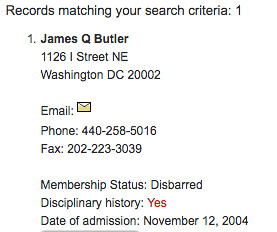 "After working with AHC, Inc. for more than a year, Butler began to work in private practice. He led a team of 4 full-time lawyers and 20+ full-time support staff in handling several hundreds of cases totaling into millions of dollars in settlement or awards. He successfully tried or settled cases against Mazda Motors, Johnson & Johnson, Jansen Ortho Pharmaceutical, VDOT, BP, and numerous other major companies, and insurance companies, throughout the United States. He has also successfully settled or litigated against every major insurance company in the nation.

Frankly, if you read Mr. Butler's campaign website without already knowing his history, you would likely think he is still practicing law, and that his private practice work was generally something he should be proud of. I think it's not. His disbarment was for pretty egregious reasons, which you can read about in this Board of Professional Responsibility Hearing Committee order. Here's an excerpt from that order:

"Respondent was charged with multiple violations of twenty-one Rules of
Professional Conduct. Further, the charges involve ten cases. Forty-two other
investigations are pending, each of which would likely lead to multiple additional charges
if Bar Counsel completed the investigations."

And then there's this article from the Blog of Legal Times Disbarred Attorney Expected to Cost D.C. Bar More Than $500K in Claims. From the article:

"During the current fiscal year ending June 30, 78 claims have been filed to date. Of those, 63 involve this attorney.

The fund trustees estimate that claims involving this attorney will cost the fund between $550,000 and $600,000. The fund is expecting to process about 150 total claims relating to this one attorney, according to the fund's annual report to the Bar.

The attorney involved was disbarred by the D.C. Court of Appeals on Nov. 5, 2009, according to the report. A footnote dedicated to explaining the spike in claims noted that this attorney’s 'practice was primarily representing incarcerated individuals seeking post-conviction relief.'”

Only two attorneys are listed as having been disbarred on that date, and Mr. Butler is one of them. Based on the order I linked to above, it appears pretty obvious to me that the attorney discussed in the article above is Mr. Butler. That fund doesn't pay out just because you have an awful lawyer. Your lawyer has to actually wrongly keep an unearned retainer, or money that should otherwise go to the client. It's a big deal. "The Clients’ Security Fund (CSF) reimburses clients up to a limit of $75,000 for losses caused by the dishonest conduct of members of the D.C. Bar."

Butler was the Managing Partner for Butler Legal Group, PLLP, which no longer exists. This was only one of his websites, which are all down now. But you can find archived versions of them through the Wayback Machine. In a Nov. 19, 2008 version of his main site (http://www.butlerlawfirmdc.com) you can see that Butler refers to having taught a legal ethics course ("Mr. Butler has also engaged in academia. He has taught at several institutions of higher learning including Indiana Wesleyan University Graduate School of Management where he taught Legal Ethics"), which I just found interesting given his history.

There's more. Here's a sample promotional video (so the other people appearing in it are actors) starring Mr. Butler for Justice for All (J4A) TV-NEWS, which he intended to be the "media arm of the Butler Law Firm." I'm including a screenshot for those who can't immediately watch the video (which I highly recommend watching). 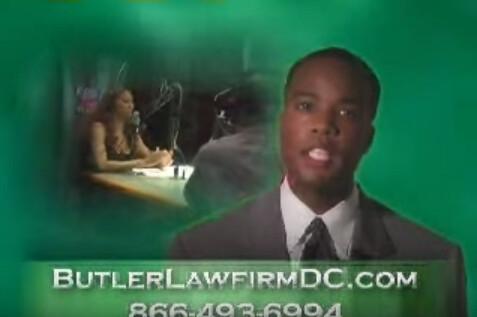 Now, all of this material is from a while ago. So maybe Mr. Butler is reformed, but I'm not sure that electing him to public office is the best way to test that theory. Plus, his own campaign website has said for a number of weeks that donations to his political campaign are tax deductible, which is just not true, and Mr. Butler should really know better. 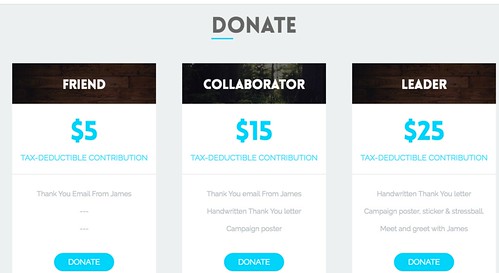 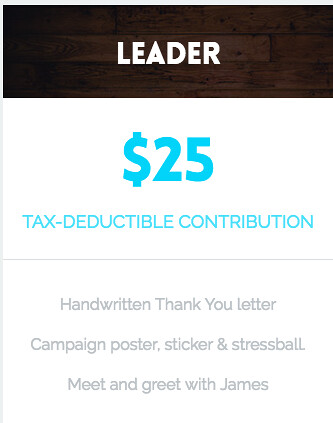 Worst TV ever! I wonder where he is seeing he will benefit from this. He does nothing to support the neighborhood.

Factual, informative and defines unethical behaviors as demonstrated by Mr. Butler. Ethics, honesty and service to our community is what we want, not this. Vote to re elect ADAM ROBERTS?

His website still claims political contributions to his campaign are tax-deductible. Not sure whether that's intentional or just grossly ignorant of basic election and tax law. Either way, VOTE ROBERTS, who is neither sleazy nor dumb.

Over half of the lyrics in the Justice 4 All theme song are a rip off of a 1982 Ray Parker Jr song.

Awesome research, thanks for putting all of it together and glad you discovered it before election day.

You are such a nasty woman.

Thank you for posting this. I think it's critical information and extremely relevant. Since our neighborhood is going through growing pains and a lot of changes, an honest campaign, and more importantly, an honest ANC rep is what we need.

Wonder if this would have been posted if Butler was white...I'm guessing no. Those of you who vote for Roberts should accept your racist inner selves and stop declare it publically instead of hiding behind white guilt.

Racist and living in Trinidad / H ST. Please...This is a matter of integrity.

10:49,
Be honest, how many times did you burst out laughing at what you just wrote before you were able to actually hit publish?

Anyone else get the flyer on their door about the guy that Kathy Henderson is endorsing for write-in for 5D-03? Never met the guy myself, I'm sure he's a nice dude, but the double whammy of a Henderson endorsement + apparently starting a write in campaign the day before e-day seems quite silly to me.

4:03,
I would love to see a copy of that material. If anyone has a copy, can you email me at Elise.bernard[at]gmail.com?

Honestly it is about power and control. African Americans want the power and control in their hands and it doesn't benefit them to give it to some white guy. You seriously don't understand it has nothing to do with qualifications? You cant be that simplistic to think the best man wins.

*sigh* i mean, at the rate things are going, what'd ya expect?

Butler, Henderson, and Trump. Perfect together.

He keeps trying to get reinstated to the bar, and he was just turned down AGAIN last month.

He's a despicable human being and should never be allowed to practice law again.

He is now running for mayor. He is going for the ultimate scam. I actually knew him years ago. He talks a very good game, full of show and very convincing. I was shocked to find out he scammed so many clients. I am even more shocked that he was recently elected and the public did not do their research or didnt care about his past. He is a GAY man and will date woman for show. He prefers light skinned hispanic men.
The word must get out and he must not become mayor. Im in disbelief.

Wow! This guy destroyed lives, and do not care. I use to work for him at Butler Legal Group, and I can tell you many more deep secrets. Shameful!!!!

Safe away from butler said...

I worked for him as well at Butler Legal Group! Just a damn scam artist

Safe away from butler said...

I worked with for him as well! Just a scam artist! I know all about the money he was keeping from retainers and etc

James Butler is very dangerous. I volunteered on his campaign and he is not forthcoming about his disbarement nor his boyfriend from Latin America.
Why all of the lies of omission James? People hate you when they find out the truth about you. Why not be honest about your sexual identity, transparent about your plan to pay the Bar back, and remorseful about the lives of people you so negative effected.

James is a gay man with a boyfriend from Latin America. He tries to hide this but its very obvious. You arent fooling anyone James.
He lacks the integrity to be in any public office whatsoever.
Needs to stop lying about his sexuality, show remorse for the hundreds of people whose lives he destroyed, and have a plan to pay back the bar. THEY WILL NEVER LET HIM BACK IN UNTIL HE DOES. ANYONE WITH HALF A BRAIN NOWS THIS!

The DC court of appeals doesn't think he's changed AT ALL: http://www.dcbar.org/discipline/hearing_committee/HCJamesQButler13515.pdf