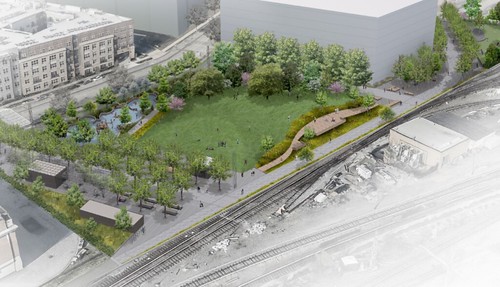 Screenshot of the concept for "NoMa Green"

The NoMa Parks Foundation wants your help to name two neighborhood parks. You have until August 25th to submit your suggestions. They'll narrow it down to 4-5 options and take a public vote, with the results determining the recommendations to be submitted to the D.C. Council and Mayor Muriel Bowser.

“Over the last five years, we have worked tirelessly to find available land, gather input from neighbors about what they want in NoMa parks, and create beautiful, well-used, and well-loved public spaces,” said the Foundation’s president, Robin-Eve Jasper. “It’s really exciting to work with the neighborhood to propose lasting names for these two parks.”

Construction is set to start soon on an 8,000-square-foot park at Third and L streets NE. That's the first of the two parcels acquired by the Foundation. The completed park will feature gathering spaces, plantings, a vertical playground structure geared towards kids ages five and up , as well as an area for canine recreation.

The general contractor for the project is District-based Blue Skye Construction, which helped create other local parks such as Kalorama Park, Volta Park, and Francis Dog Park. Sidewalks will remain open during construction, which is projected to wrap up this fall. But be aware that the construction entrance is on Third Street NE, so there will be a bit of traffic. Once construction is complete the park will be owned by the District government and maintained by the Friends of NoMa Dogs.

Construction on the larger park (referred to as NoMa Green during the planning process) should start sometime in 2018.
Posted by inked at 7:13 AM

I thought American tradition states they should be named after the losing generals from our latest military conquest and erect statues of said losers?

Will we burn witches there?

No ma parks! (Say it like No more parks)