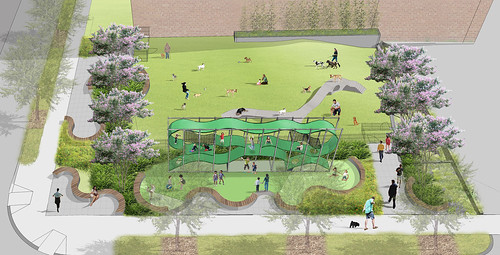 The new park coming to 3rd and L Street NE has a name. It's going to be called Swampoodle Park. Swampoodle was the name of a 19th century Irish neighborhood near where the park stands today. Swampoodle Park will consist of roughly 8,000 square feet, part of that falling within the public right-of-way. Per the NoMa Parks Foundation, the completed "park will include plantings and gathering spaces; a vertical play structure designed for children ages five and up; and a large space for dogs to run and play, complete with a dog agility ramp." Construction was to be completed by November, but is still ongoing due to delays. They are now shooting for January.
Posted by inked at 7:14 AM

Will it include a tent encampment?

when is this shiz opening?

Patrick,
Doubtful, but if tents are your thing you might want to check out the climate controlled pavilion at nearby Wunder Garten.

3:08,
Should be ready to enjoy before the warm weather comes in spring.