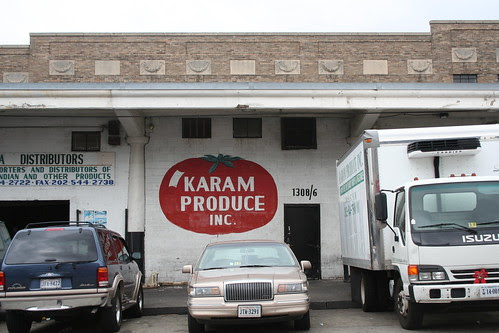 I've been waiting for the story to go online & it's now available here. The article is about the New Town vision that a group is proposing for the Capital City Market. The proposal basically calls for leveling the area, building a new strucure to house any remaining merchants (I haven't heard any plans to temporarily relocate any merchants during construction, but even if there is such a plan, you are going to have some attrition), and then adding affordable(by whose definition?) housing, a medical clinic, an outdoor ampitheater, a bowling alley, a movie theater & more. There are many obstacles to the plan:
1. many of the 69 land owners in the market area don't want to sell;
2. Gallaudet (which owns more than 1/3 of the land) doesn't want to sell;
3. DC owns almost 1/3 of the land & would likely be asked to donate such land;
4. the area is zoned commercial/light industrial, so you couldn't currently have housing there (and that would be a major zoning change);
5. There is no secured financing for this project (will the city end up paying for it?)
6. The plans are poorly developed & not fleshed out.
7. Backers of the plan have requested special legislation that would allow the major to exercise emminent domain so that they can get their hands on the land. 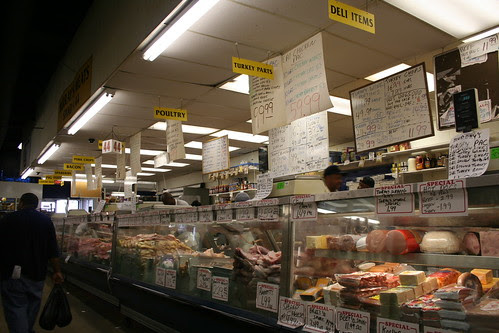 Inside the DC Farmers Market. 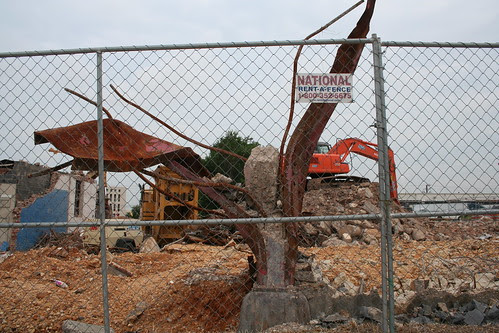 Demolition is occuring even now. This is the U.S. Beef building (which had been vacant).

I'd like to offer the following quote from Ellen McCarthy (Office of Planning): "It's very hard to point to a great neighborhood that was created from scratch." Ms. McCarthy isn't talking about the New Town development (she's talking about the area around the baseball stadium -actually you should read this article too because it addresses some relevant issues), but I think the quote could apply here as well. I just really don't get the point of tearing down the historic buildings & putting the existing vendors in jeopardy for what appears to be a very half-baked plan. I've said before that I think the best move is to work with the existing buildings & existing vendors to incorporate more retail (mostly have existing vendors become a little more retail friendly), maybe a coffee shop & some restaurants eventually. I also like the previously proposed idea of a small cooking school (this could be a great opportunity for real hands on vocational training). The Capital City Market could continue to cater to the existing wholesale customers, broaden its appeal to retail customers, and as DC's last market district (I'm not going to include the Waterfront), even appeal to tourists (as does the Italian Market in Philadephia). To see photos of the Italian Market click here. To see photos of the Capital City Market, scroll to the bottom of the sidebar & click on the photo set for the Wholesale Food District.

they would be smarter to just put retail there. there is a glut of residential development and a paucity of retail development in the area surrounding the new york ave metro. can we get some quality retail please? the outdoor ampitheater might be interesting, but i'd rather see a indie film spot. or a bookstore.

What about the fact that this is really the last district of its kind in DC? This plan basically calls for leveling the area and building a suburban-style planned development in its place. I understand your frustration about retail, but retail is coming to the area. I doubt you'll see an indie film spot anytime soon (but I know that Alphonso has a projector & has toyed with the idea of showing films upstairs some nights at R&B Coffee). The E Street Cinema does fine, but Visions had troubles at a location much better than this one. And you have a bookstore (with an Ethiopian shop -Sidamo- going in next door) right in the 400 block of H Street. Plus, much as I hate that it is true, bookstores are a hard sell simply because big stores like Borders & online sales have basically stripped away much of the profit potential. If you are headed to Philly any time soon, try to stop by the Italian Market for a look at what I think sensitive development of the area could look like.

I was troubled by the characterization of the area as "blighted". It's up and running and serving a useful purpose. That's different than being a bunch of boarded up buildings.

You can't just put "retail," somewhere. Retail opens based on market realities. Of course, retailers perceptions of viability tend to lag changes in the market. In any case, the area needs love, but is viable already. Plus, as I wrote in my entry about this a few days ago, new construction means uniformly high "new rents." At least $50/s.f.