DoJ To Consolidate at Constitution Square,

Washington, D.C., March 6, 2008…The U.S. General Services Administration (GSA) has selected Constitution Square, a new mixed-use development in the NoMa (north of Massachusetts Avenue) neighborhood of Washington, D.C., for a

Located adjacent to the New York Avenue Metro station on Metro’s Red Line and directly south of the new U.S. Bureau of Alcohol, Tobacco, Firearms, and Explosives (ATF) headquarters, Constitution Square is under development by affiliates of StonebridgeCarras of Bethesda, MD and Walton Street Capital of Chicago, IL.

“First NPR, now the Justice Department -- this week has been an incredible ride for NoMa,” said Washington, D.C. Mayor Adrian M. Fenty. “We’ve promised to drive investment in emerging neighborhoods, and the investments we’ve made to help secure these two anchor tenants are the quintessential examples of just what we are trying to accomplish.”

Constitution Square’s first phase of development, scheduled to break ground in April and deliver in 2010, will total 1.6 million SF and comprise not only Two Constitution Square but One Constitution Square with 340,000 SF of office space, a residential building with 440 apartment units, and 80,000 square feet of retail space including a planned 50,000 SF high-end grocery store. Both office buildings are being designed by HOK Architects of Washington, D.C. to achieve the LEED (Leadership in Energy and Environmental Design) Gold rating from the U.S. Green Buildings Council. Clark Construction Group is the general contractor. 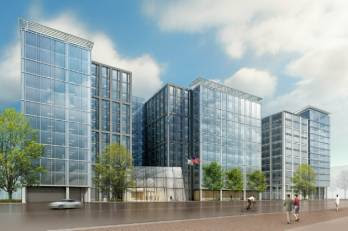 The final phases of Constitution Square are planned to include an additional 400,000 square foot office building and an additional residential building with approximately 500 units. The seven-acre complex will cover an entire city block bounded by M Street, N Street, 1st Street, and the New York Avenue Metro Station.

30,000 square feet of additional retail space, and direct access to both entrances of the New York Avenue Metro station.”

“Along with the NPR relocation announced on Wednesday, NoMa has entered a new stage of accelerated development with this long-awaited lease,” said Elizabeth Price, President of the NoMa BID. “By the time DoJ moves in, the NoMa neighborhood will be well on its way to realizing its mixed-use vision with a total of some 20 million SF of new office, retail, residential, and hotel space. The area will be alive with restaurants, shops, and thousands of people in a pedestrian-friendly environment. NoMa’s convenient location just north of the U.S. Capitol on Metro’s Red Line makes it an excellent location for businesses and residents alike.”

NoMa is an emerging mixed-use neighborhood north of the U.S. Capitol and Union Station in Washington DC. Private developers have invested approximately $1.5 billion to date with plans to develop over 20 million square feet of office, residential, hotel, and retail space in the area covered by the NoMa BID over the next 10 years. The BID provides daily street and sidewalk cleaning, safety ambassadors, marketing, events, and other services to make NoMa a clean, safe, and vibrant neighborhood for businesses, residents, and visitors. For more information about the BID, including an interactive development map, see the BID Website at www.nomabid.org.
Posted by inked at 6:20 PM

This is a pretty big deal. It pretty much solidifies NOMA as a legitimate development area, at least as far as office space goes.

I couldn't have said it better myself, Hillman. This is going to have a major impact on the neighborhoods north of H Street. I'm betting it will be positive, with more people looking to move into an area that is typically cheaper than other parts of DC. Maybe some of the condos at Morton Place and Union 5 will sell.

I completely agree. More office space = more demand for retail services and housing. This is good for our neighborhood.

any more news on the harris teeter?

I'm also very curious about this Harris Teeter. With the DoJ I think it's more of a sure thing.

They're breaking ground in April so the announcement has to come shortly.

I haven't heard anything new on the proposed Harris Teeter. Does anyone know if they have signed a firm and binding agreement to lease space in NoMa? I don't believe they have, although I could be wrong.

Oh, I see now. It's spam. I think it's a tribute to this blog website that somebody would take the time out to spam this crap here