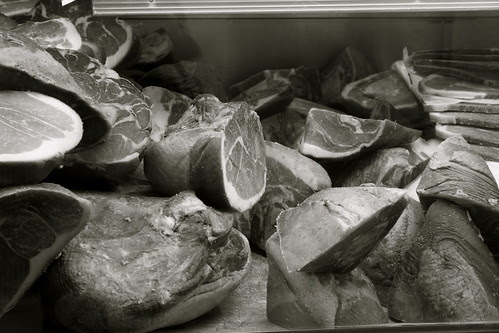 Englert Will Feature Bloody Slabs of Meat on H

Serial bar owner and notoriously badly dressed entrepreneur Joe Englert, has launched yet another bar/tavern/restaurant schmaltzy theme eating establishment on H street corridor. This time he appears to be trying to cash in on the recent success of New York City's Meatpacking District, while also giving a nod to our own area's history as the site of multiple slaughterhouses. Enlgert has expressed hope that the new establishment, Sinclair's LLC, D/B/A Slaughterhouse 5, can become a destination restaurant. And here's the kicker, he proposes purchasing and occupying the large space currently occupied by the Autozone and its parking lot in order to accommodate his mega bar/tavern/restaurant.

"Slaughterhouse 5 will be the best in family dining," spouted the poor-man's Jack Ruby at a recent 6A ABL Committee meeting. "It will be part theatre, part dining, and part bloody butcher shop. Plus, we're going to have this really cool bar in the back called the Jungle."

Dining patrons will enter a small holding pen and select their own bovine. A meat hook will take the unsuspecting cow into the slaughterhouse and peel the animal's skin. Then three USDA inspectors will ignore the health, size, and cleanliness of the animal. A white-coated grill cook will slice and dice Bessie into chops, shoulders, ribs and other cuts. The meat will be deep fried and served with a side of slaw and sweet potato fries.
"Of course, our bar is called The Jungle," said Englert. "And drinks and menu prices will be way out of whack for what a mediocre restaurant should charge on H. I plan to franchise the restaurant and open up in cities like Abilene and Dodge City, Kansas. And seriously," continued Englert, "this is totally my best idea since I tried to make people eat bugs at my bar on U Street. I can't wait until the Food Network hears about this one."

Not surprisingly, the concept of the mega bar/tavern/restaurant has brought to a boiling point the racial and economic tensions ever present and palpable on H Street. "What about the Autozone and all the good people who depend upon its parking lot for their livelihoods?" cried an outraged Mike Brown, who identified himself as a mechanic and said he regularly works in the lot. "Doesn't anyone care about the chicken wing/Italian sub/pizza/Chinese food places on H this thing will probably drive out of business? Some of these places have been here for years and for a long time they represented the neighborhood's sole source of racial and ethnic diversity," lamented 12th Street resident Dave Pierce, who moved here three months ago after finishing his sociology/American Studies double major at the University of San Diego. Neighbors of Autozone also spoke out in defense of the auto parts dealer. "Autozone has never given H Street anything but the utmost respect, and now we're going to lose it to some hyped up meatpacking plant?" Demanded neighborhood activist Bobby Pittman angrily. 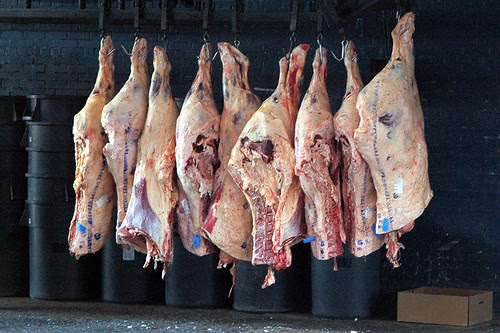 Photo by Limonada
"This slaughterhouse/restaurant will probably put a lot of black-owned slaughterhouse restaurants out of business," said long-time resident, and headlining guest speaker at last month's H Street History Trail meeting, Bessie Ann Collins. "When I was a child, my father and I would walk up and down these streets and have our pick of slaughterhouse-restaurants. Now, you just have a crazy honky like Englert opening them. "It was a sad day when a man with such a hairy back started such a sorry assed monopoly on our street..." 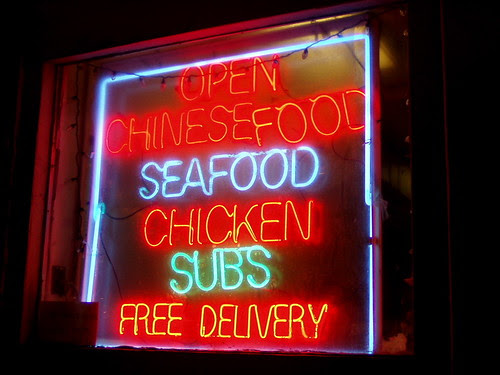 One of the long-standing multi-cultural businesses threatened by Englert's mega bar/tavern/restaurant.
"I miss the bullet proof glass of those Chinese-American-Italian places," complained Collins. "I liked a place where you could get moo-shu shrimp, pizza and fried wings in the same place. It was my little own piece of heaven and there was plenty of parking back then. "Can't Englert just go back to Kansas where he came from?"
Posted by inked at 12:09 AM

You just can't expect a fine idea like this to flourish without a meaty well done website to stake their claim to their cut of the restaurant trade, outflanking the competition.

Quite the rare opportunity here.

This is a goooood one! Better than the one I pulled on my dad this morning. I guess now that I'm 30, the whole "I'm pregnant!" thing doesn't bring forth the shock, awe and horror it used to...

Great work....on all of it...forget what date it was when I first started reading!

YES! You really got me..my mouth was literally hanging open in utter and complete confusion!

Nicely done. You had me until they were actually slaughtering the cows on site. I thought, "That's disgusting!" and then realized the joke's on me. :)

This is Inked's brain without law books.

OK - I'll confess; I was thrilled with the idea of replacing the Auto Zone with an upscale restaurant. Sigh. Suffice it to say, the highest and best use of three lots in an urban commerical corridor is not a one-story auto parts store and a surface parking lot.

Very, very nice work. For a minute, I even thought the owners of Autozone had finally been made an offer they couldn't refuse..

At the risk of breaking the mood, 1D officer critically injured in Old City last night at 12th/K/Florida/Montello intersection while responding to a call.

i honestly didn't catch on until this part:

"Dining patrons will enter a small holding pen and select their own bovine. A meat hook will take the unsuspecting cow into the slaughterhouse and peel the animal's skin."

i figured that was TOO way out there, even for this englert cat!

I would take most anything over Autozone!

I think this calls for a companion housing development.

BRILLIANT! Thanks for the chuckle.

I was on the hook way way down into this post yesterday. Englert jumps the shark....I was composing my comment as I read. Thanks for a bit of fun to break up the day.

This one I liked the most, because of the subtle references to Upton, USDA inspectors, and the sociology major...

Health food and nutrition is essential for a living body such as good engine oil for AutoPartsWarehouse Coupons, because it helps to grow the activity level for us and the fresh meat is one of best food for human beings.