Girlfriend No Longer Has Excuse To Not Visit H St Boyfriend

"I want to stay home and have a Big Slice or two. Besides, there isn't anything but crackheads in your neighborhood. And storefront churches make my allergies flare up"

Ginny Mickelson NEVER came to H Street before 2007, and since that time she has ventured over to the northeast neighborhood exactly twice. Once when Rob forgot the evening's concert tickets and had to retrieve them from his house, and once when Rob's parents were in town and wanted to see where he lived. Other than that Ginny has successfully avoided her boyfriend Rob's calls, his pleading, his pantings to come visit him.

So far this year Ginny has used the following excuses multiple times: "I want to watch rerun of the Wire" five times. "I have a headache" three times and "I want to spend more time alone," seven times.

"He has funny German glasses, he likes the Shins, he has an Arsenal scarf," sighed Ginny. "And now the jackass lives in a place the Going Out Gurus recommend. I guess I have to get my ass into a cab and head over."

"I saw Napa used sun-drieds," said Ginny referring to the sun-dried tomatoes sprinkled liberally throughout NAPA's menu. "And that was the deal-sealer for me. No white woman with a college degree can pass them up. I am going to come over at 7 p.m. maybe 7:30 this Saturday. Tell him to make sure no black guys are hanging on the corner this time." 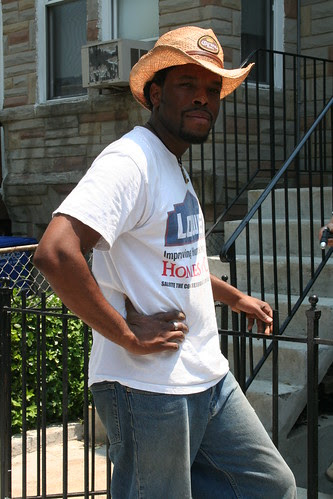 One of the black guys who had better not be hanging on the corner this Saturday around 7pm.
Posted by inked at 12:03 AM

This one is HIGHlarious!

where's the funny part ? typical of neo-racist, overrated sense of entitlement cr**kers ! no wonder the guys in the hood are poppin you in the heads.

Wow, I was truly for gentrification, but your blatant racist humor is truly tasteless. I too will continue to laugh as the hood rats break into your homes and knock you over yo heads! Dumb Whitey, Dumb!

Why are anonymous people so easily offended and have no sympathy for gallows humor?

Unfortunately inked has misjudged the readership. Her post was an attempt at humor and a lot of people thought it was funny, but for a lot of people it isn't. Think "all user groups" when posting and that can usually keep you safe.

Oh, please. It was very funny, and Inked can certainly push the limit with some well written satire on HER OWN blog.

"Bad taste" - please don't try to tell her how to judge the readership. We've all known people reluctant to come to H Street to visit us. Maybe if you can't get a joke and a parady of some of those people, you should self-select out of the readership.

This is hysterical! I know plenty of people who fall into the "I'm afraid to go to H ST crap"--even people that live just South of the area. Inked is making fun of their small-mindedness. Well done!

I know people that live north of D and east of 10th that wouldn't come to H st until I walked them down here myself.

OK, chill. It's a joke guys. And it's clearly making fun of the girl's attitude. There are people who are certainly afraid to come over here and I think there is certainly [though not necessarily in all cases] some racist undertones. I chose the photo of Tony because if you saw that guy hanging out on the corner you'd be pretty silly to fear him. It's satire. You can't reasonably think anyone would support that girl's stance.

Inked is clearly making fun of the "white" girls. I love the wit of all these April Fool's posts. She seemed to pretty fair about leaving no one unscathed in her comments.

If I came to your neighborhood and saw Tony standing on the corner, I'd probably move there! Do you think he'd be willing to take his shirt off and help me out with some of heavier boxes? And then he'd leave the hat on, right?

The racism, the sexism, the homophobia! The police state, the monopolies, the wretchedness of it all!

Ah for the old days.

Very funny. I would show this to my scared-of-H-Street friends but I have a feeling the humor would be lost...

Thanks for the laugh!

Does Tony have boots, too, or just the hat?

Just the hat. We were at a Garden Club event.

Made this in response, years ago, to a negative thread about an Inked photo, which is the cover. In honor of the Omnipotent comment...

Oops, the link didn't go through: