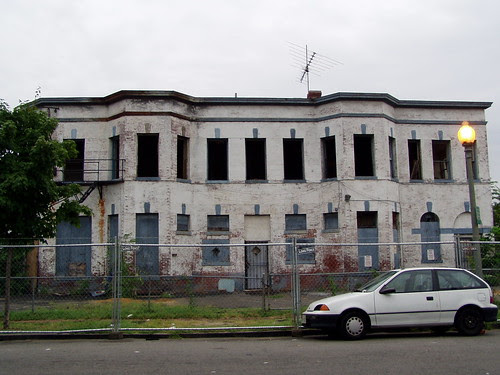 The future site of the Capitol Hill Oasis as it appeared in August of 2005. I wouldn't exactly say the townhomes have been an improvement.

DCmud reports that the Capitol Hill Oasis, which is neither located on Capitol Hill, nor any sort of Oasis, has commenced phase two of the developer's master plan. Phase one involved building a bunch of prefab townhomes that don't exactly blend in with the surrounding buildings. Construction on those was officially completed in 2008. The sidewalk on that half block of 12th Street has been fenced off for more than five years now, forcing pedestrians to either cross the street, or walk in the street. To date none of the massive townhomes have sold. But not one to be deterred, the development team is pressing ahead with plans to build condos...in the alley. Hmm...

I actually live directly across the street from this project, and it is endless frustration and bewilderment.  And then there was the time they excavated too close to Jimmy's Tire (lots of photos) and caused the back wall to collapse. That led to an unfortunate series of events which culminated in the obliteration of Jimmy's Tire in a massive fire started by a contractor hired to repair the wall.

Did you know the Capitol Hill Oasis site was originally slated to become the Negro League Legends Hall of Fame?

Apparently this property is up for auction on Friday at 2pm. Here's the listing:

http://client.tidewaterauctions.com/public
Posted by inked at 2:41 PM

Yeah, I wonder how many investors have lost all their money on that thing. But better finished than just festering there.

why build condos when the rowhouses haven't even been put on the market? seems like there's not much to do to finish the houses off, makes no sense, what a waste

Moreover, why would someone spend $$$ to buy one of these townhomes when there is still a contruction fence surrounding the complex, not sidewalk, and unfinished parking areas?

i've always assumed this development must have been some type of investment scam. the original plans were so outlandish and out of sync with the neighborhood there really was no realistic way these homes could have sold anywhere near the prices they wanted. where they could have gotten the money to proceed to phase 2 is beyond me.

At my ANC6A01 booth at the H Street Festival, I heard from area residents about the lack of sidewalks, parking problems, dust, and truck noise from the project site. I'm working on a plan to get the developer and city officials to meet with area residents to address these and other concerns with the project.

I've never understood where they were going with this project. I like our neighborhood a lot, but I wouldn't pay a million dollars for a house here. I don't have anything against prefab, but they could have spent a little more money and made them prettier than the brick boxes that they ultimately became.

I would like to meet the investors who are backing this because it is always good to know someone with more money than sense.

I wonder if the unit with the broken windows is selling for a discount.

Hopefully the place will catch on fire and someone else can develop something there.

how on earth are they going to get condos in the alley? odd

I love the computer rendering of the completed project in the original DCmud article. It shows a yellow Corvette parked in front of the row-houses. Hilarious. It's like a 15-year old was put in charge of designing these things. We've been trying to convince one of our friends (Joe) to get a Corvette, simply because we will mercilessly mock him for being a giant douche-bag. And that's exactly who will buy these over-prices pieces of crap.

i guess they are desperate to sell something to some poor desperate buyer, so make some condos to sell of cheaply to make up for the losses on the town houses. crazy stuff.

heres who is responsible for this mess: http://www.gbh-associates.com/herndon.html

Ah, a phase two. I wondered why there were men working and catcalling me from over there the other day.

anon 1:01: Funny point about the Corvette. I think it's even facing the wrong way- isn't 12th street one way south there?

The whoel project does seem like a scheme to have business loss tax write offs.

Um..if I lived in the immediate vicinity of that eyesore, I would be on my way right now to Park hardware for some kerosene and a lighter.

Wow. The original structures were quite attractive. If they had just done nice gut renovations of the sort that are done all the time to shells, they probably could have spent about 1/10th as much and actually been able to sell them.

i agree with jamie, considering what has been done with shells of rowhouses all over dc, renovating the 2005 version of this lot would've been a much better idea. obviously the developers are in no rush to sell these places, they can't even finish them off to put on the market

montello is the street that is one way going south

the oasis is south of florida though, on two way 12th st

in any case, i just want them to finish the things so we get our sidewalk back and the street isn't so tight when cars are parked along that fence

Wait a minute, so why did I find this listing with Tidewater Auctions that shows this site up for auction this coming Friday at 2 pm?

Lets be honest guys...can any of us actually live without an elevator in our hideous townhouse?

Not only has the closed off sidewalk been a pain but everyone who shares the alley (myself included) has been terribly affected. The chain fence pretty much blocks access to our parking area. The condos are only going to make this worse.

What a terrible concept and a worse execution. Shame on whoever let them do this.

You've got a fence that needs moving. I've got a beat up pickup that I like running into things. I believe a solution is near....

Truly a shame. I wish the powers that be (or were) would have made it the home of the Negro League Hall of Fame (legends).

This is the worst design Ive even seen. I told the owner this to her face! I designed better houses in the 7th grade (im an architect). The facades are hideous, the plans make no sense!, the materials dont match (color) and the end units, a premium!, have no side windows!!!! arghh!!! the living room is on the first floor. the kitchen, a bedroom, and 2 full baths take the 2nd floor! huh!!??
idiot investor with no taste and non-responsible architects who didnt stop her!
booooooooo! knock them down!!!