As we've discussed, the Queen Vic has a new Head Chef (apparently he prefers that title to Executive Chef). The good folks at the Vic have been kind enough to send over a nice bio/press release. Reeves sounds like he'll be a perfect fit for the gastro pub. Check it out:

Born and raised in Gloucestershire, England, Chef Reeves’ early influences are his mother cooking family meals daily and experiencing the local farmers market in Stroud, where his family went every week to pick up local produce and meats. His passion for sourcing local product to create mouth-watering dishes was further fueled by working at various inns, pubs and restaurants in the Gloucestershire area after leaving school.


In 2005, Chef Reeves was invited to join the team at the newly established Indebleu as Chef de Cuisine. After a year of working under Vikram Garg’s tutelage, Reeves was presented with the opportunity to help revamp the food menu at Capitol Lounge. During this time, Reeves met his American wife to be and within a year, they moved back to the UK so that she could finish her studies in London. After a one-year stint at Roast in London, Ian finally found his calling, working as Head Chef in London’s Bull and Last. This renowned Gastro Pub shared Reeves’ philosophy of using only local and seasonal produce in all their dishes and while working there from 2008 to 2011, Ian had the pleasure of cooking for all the major London bloggers and critics and his kitchen was consistently rated one of the best Gastro Pubs in the capital. He was also a huge influence on the creation of The Queen Vic, offering advice and help via email and through transatlantic visits throughout the build out and the early days of opening. Fortunately for The Queen Vic, Ian’s wife soon became homesick and they decided to move back to DC, where he met up with long-term friends and past colleagues Ryan Gordon and Roneeka Bhagotra-Gordon who were thrilled to be given the opportunity to once again work together.

In his spare time, Ian is a big fan of graffiti art and has travelled all over Europe to find Banksy and The Space Invader installations When not in the kitchen, you can often catch him at a gig at The Black Cat and he has a strange obsession with pirates!! 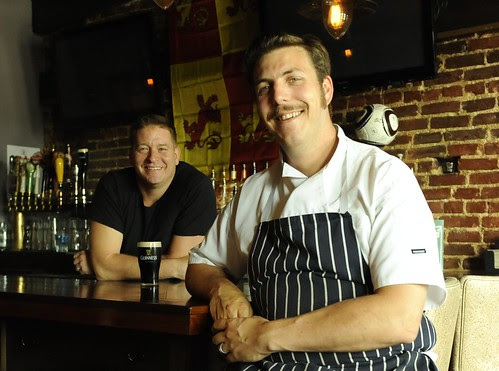 Though The Queen Vic's menu will not be changing too drastically, Head Chef Ian (he thinks the title Executive Chef sounds a little too flashy!) will certainly be including some of his creations on the new brunch, sunday roast and dinner menu, but will definitely still be serving the favorites. Ian is a huge supporter of using local, seasonal and naturally raised and grown items whenever possible, which fits perfectly into The Queen Vic's ethos. His official start date is Friday 2nd September, but he has been and will be spending plenty of time this and next week with us. We are extremely excited to be working with him again. Not only do we know he is a fabulous chef with great integrity, creativity, talent and a head for the boring numbers, he is also an intelligent, sensitive and incredibly funny guy, who will be bringing a little more "Brit" to our venture!
Posted by inked at 4:30 PM

it's Reves, not Reeves.

Really though, if you are not Magnum P.I., don't do the moustache.

Kathryn- Some women like men with mustaches. The world does not revolve around you. awesome!

Kathryn-
pornstache? really? that's about as relevant as me asking how you trim your vajayjay. point is, it just aint relevant.
Cheerios!

Nothing works magic like a sexist woman aka Kathryn. Imagine guys commenting about a woman's physical attributes and hell would break loose.

To Kathryn: I rather like the stache and find it rude to criticise this man in a public forum. I agree with Tera Patrick, regarding public criticism of your "vajayjay" - ha. It's totally irrelivant to the story, not to mention potentially hurtful.

Welcome Head Chef Reves! I look forward to trying your fish and chips!

Welcome back to DC Ian, another Brit on H street, always a good thing.
And you know what mint sauce should be....ha!

When will this "new brunch" be introduced? Obviously after sept.2, but anyone have a specific date. Welcome Chef

5:07,
I definitely posted a reply to your comment before, but I don't see it now. Weird. Reeves is the correct spelling. Eater got it wrong in the original version of their post.

Like the photo of Ryan and Ian. I hope it's a good marriage between chef and owner. I wish both the best! Look forward to trying some new dishes at the QV.

How much are pornstache rides?

Hmm, was thinking about taking the family out to dinner tonight in a post-quake/hurricane outing. If the new chef doesn't start until Sept, how's the food now. I really can't stand going out with all five of us, spending $150 on dinner and to have it not at least be decent. Any current reviews on how the food is now?

current review: very favorable. i just had a meal that far surpassed what was being served earlier. kudos to management for taking back - and improving upon - the high kitchen standards that were in place earlier.