Is That a Giant Easter Egg? 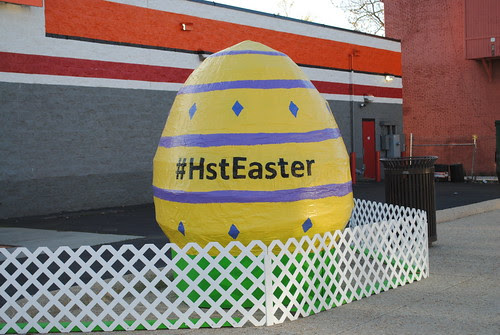 You've probably noticed the giant Easter egg that's been hanging around H Street recently. It's big, and yellow, and has the hashtag #HstEaster on its side. The egg is the work of Capital City Church, which holds its services at the Atlas (1333 H Street). The church members wanted to reach out, and engage the larger community in a fun way. Though the egg has mostly hung out at the corner of 11th and H, it has also visited Taylor Gourmet (1116 H Street), and I'm told it may have a Karaoke night in its future.

More info and pics of the egg's construction after the jump.

Here's a little more about the egg:

"The overall dimension of the egg is 7.5 ft tall, 5 ft wide, with its largest circumference being 16 ft. The egg itself only weighs about 75 lbs, but is weighed down internally with lots of extra weight to keep it from blowing away like in the 30 mph winds we got on Monday, which was a true test for its durability. The only 'crack in the egg' has come from some small act of vandalism when someone tore a small hole in the back to take a look inside. The egg can play music, talk and listen, all of which is done with electronics that are taken out when not in use, which is what the person who vandalized it on Sunday discovered."

All pics and explanation text appearing below provided by Hunter Wilder, the guy who actually built the egg. 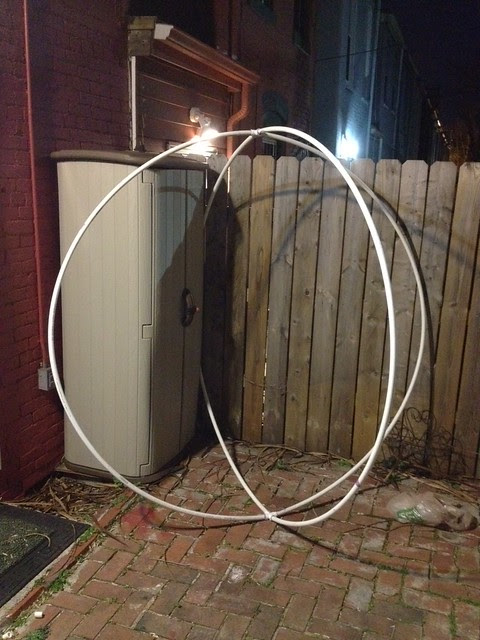 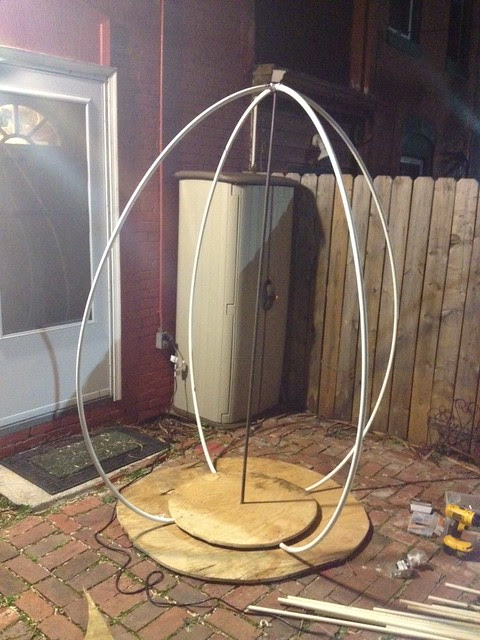 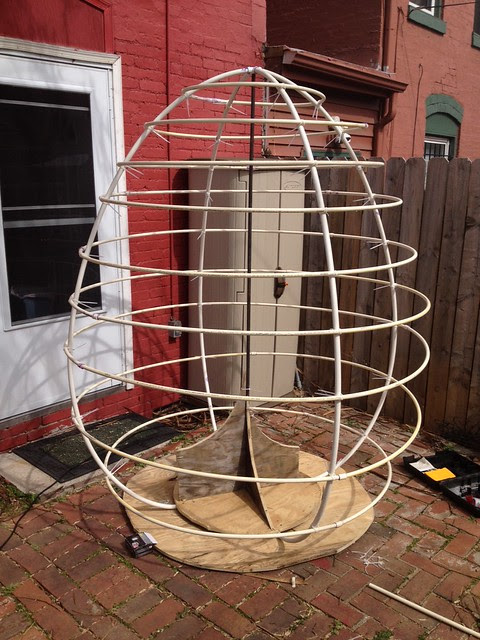 Now make several different sized circles out of PVC pipes and secure them around the egg. The shape of the egg is finally coming alive! 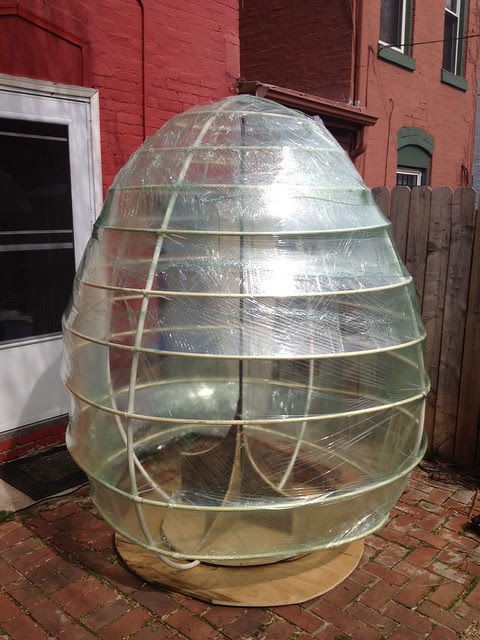 Now wrap the egg up and down with packing sealing wrap as many times as desired. The more you wrap the smoother you egg will end up. I actually thought about stopping the egg here and adding some lights, would have looked really cool and modern. 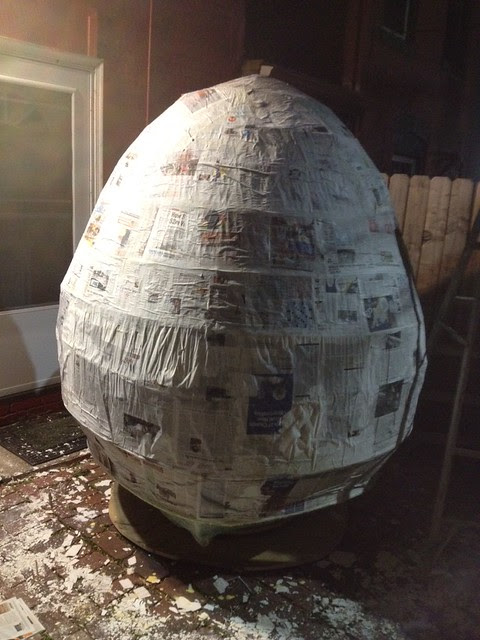 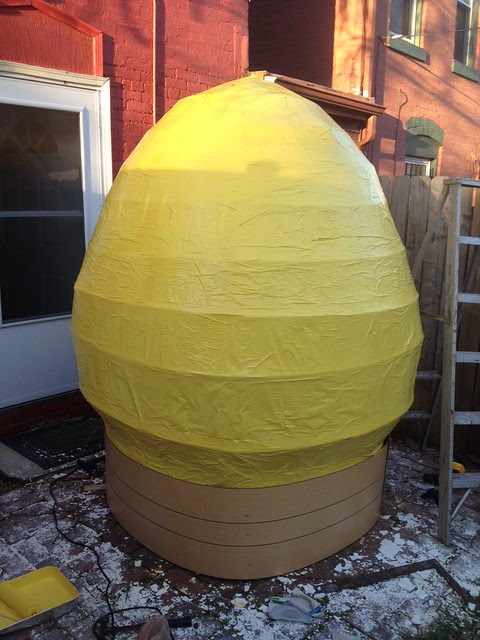 Paint with regular exterior paint once paper mâché has dried completely and thin plywood around bottom to form a base. 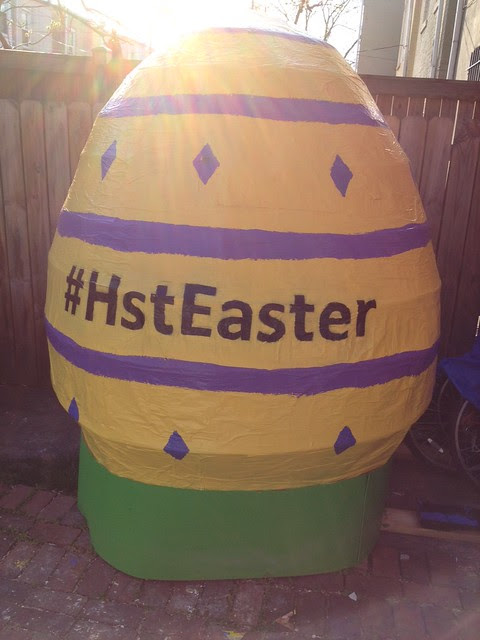 Decorate to your liking!
Posted by inked at 11:13 PM

This whole concept is brilliant. What great use of a hashtag, and nice execution on the egg itself! I saw it near the AutoZone on my way home tonight and it really made me smile.

H Street really is the the best neighborhood in the city. This is the eclectic charm that I've been searching for since moving to DC nearly a decade ago, and it's heartening to see it burgeoning in my neighborhood.

I seen yellow tape around the Capital City diner...Im guessing it got sold (Ebay) and will be moving soon. Any details Inked?

The diner has been sold, and will be moving shortly. I am not sure where it is headed.

I've seen it in a truck driving up and down H a couple of times. Fun!

Anon. 6:22. I believe the church that runs Ebinezer Coffee House is the area anti-gay church. Is that the same group? Most churches are anti-gay though, so I don't know that Capital City Church is any different.

I also think the easter egg is fantastic - what a great way to connect with folks in the neighborhood. It makes me smile when I walk by. And also wonder will the cadbury bunny hatch out of there? Thanks Capital City Church!

It's the National Community Church (Ebenezers coffeehouse), plus they just bought a TON of Barracks Row that may or may not be antigay.

They have supported African pastors in the past that turned out to advocate killing gay people.

The question has been asked on various forums (admittedly, not directly to them) and so far there hasn't really been a good answer from them on the issue.

it'd be sortof nice to get a definitive answer.

And not some sort of 'killing gays is bad' generic crap.

Something actually outlining where they come down on gays being equal citizens under the law.

if it's true, it'd be really nice to know.

If it's not, it'd be really nice to clear their name.

But the rumor is definitely out there. I hear it a lot.

Hillman- how do you define anti-gay?

I'm pretty sure that both churches would agree that God loves everyone unconditionally. There isn't any judgement on anyone who walks through their doors.

Cuteness, movies and coffee houses will always win over thinking , and yes over human rights.

why is this "christian" church espousing pagan sexual fertility rituals??

Jebus would be outraged.

Yes, Hillman, it would be good to know something definitely either way. Until then, I think Ebinezer Coffee should be boycotted.

And Paul, I'm sure both churches will SAY they welcome all unconditionally, but if you're gay, with most Christian churches there is definately judgement. The obese glutton (by choice) will have far fewer stones cast at him then the person who was God-made gay.

I attend Capital City church and they are not affiliated with National Community Church although occasionally do group events. CC has never ever mentioned anything about gay people during service. The church is very conservative and promotes no premarital sex and no wine at church social events.

Dear, dear Anonymous, why don't you visit the church and see for yourself? It may be that it truly is a loving place filled with people that love everyone, no matter what life style they live. <3 lasts forever.

The only love that is unconditional is between a mother and a child in every species. The love that you experience in institutions that are part of organized religion is always conditional. The bottom line is that we will love you as long as you convert to our way of thinking and beliefs.

The obese glutton (by choice) will have far fewer stones cast at him then the person who was God-made gay.

Hey guys, I wanted to share an email response from Capital City Church's lead Pastor to some of your questions. Here's what I got:


Elise - Thanks so much for the opportunity to speak to such an important subject. I understand from Paul that your readers are some of the most respected members of our community. I'm grateful to have an open channel of communication to talk through questions about Capital City and our role in the community.

Capital City does not see its role as a political one. I've always believed Church should be a place where people can unify around the goal of pursuing a relationship with God and demonstrating the love He
has for mankind. Taking political positions isolates people of opposing views from being able to participate in that goal. Church should be a place where we can cast off our party affiliations and
political perspectives to seek God together.

Capital City does see its role in the community as a source and model of God's unconditional love for people. It's my goal to create an environment where every person knows they are welcome and loved. If
we can inspire people to live loving lives, perhaps more and more people will be able to see God for who He really is: pure love. The difficulty is that society (religious and non-religious alike) seems to have become convinced that you can't both love people and love the Bible as a source of guidance. This is absurd to me because Jesus, Himself, said that the entire Bible can be summed up in two sentences: Love God. Love Others. The Bible is actually the prescription for how to love people well!

We're on a mission to demonstrate that you can do both. You can love the Bible as God's Word AND love people right where they are. In the past, churches had a tendency to set a list of requirements for participation, as if one group of people had "arrived" and were worthy to be a part of church and others were not welcome. At Capital City
we recognize that we're all on a spiritual journey and growing toward perfection as we seek God and study the Bible together. We don't have anyone who has already "arrived" in our church. Everyone is welcome
to engage in that journey and no one is expected to believe or behave in any way before jumping on board.

I want to present a challenge to your readers and to our community.Give us one month. Try out Capital City for 30 days by going to Sunday services, LifeGroups (small groups) and events. See if we're
succeeding in our mission to present Biblical teaching with unconditional love for people. Do you feel respected, loved and cared for? Do you see God in a new way? Do you feel challenged to love
others better? Is the Bible affecting change in your own life? Along the way, send me your feedback. We're not perfect, but I believe our team is amazing at loving people. I'd love to hear about your
experience. You can reach me via email: pastors@capcitychurch.com


We pray for all of you in our community daily and we're expecting for God to show His love to all of us in amazing ways this year.

Happy Easter! We do hope to see many of you for services this weekend at the Atlas Performing Arts Center. Great time to kick off your 30-day challenge!

Dear Pastor,
Thanks for your offer and one month challenge. However, the big difference in your beliefs and agnostic such I is that I don't feel the need to convert you to relinquish your belief in Jesus and offer a month of trial membership to the church of agnosticism. You do have an ulterior motive and your entire plea explicitly states so. Therein, lies the difference. I therefore would politely like to decline your gracious offer.
yours truly,
Agnostic

If you don't feel the need to convert others to your point of view, why did you post your comment at 7:41? Sounds like you do have something in common with Pastor.

Orange,
There is a marked difference between stating one's point of view and proselytizing. I can very well claim that your statement is meant to incite.