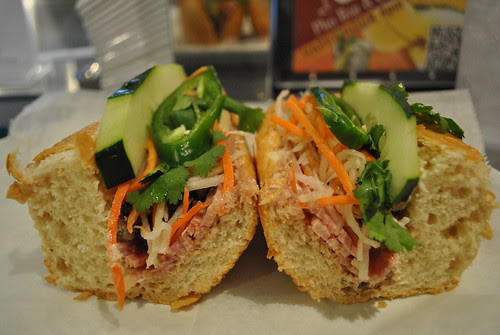 Is the Bahn Mi back on the menu? I had one the first time I ate at Pho Bar & Grill (opening week) and thought it was tasty. However, when I went back, it had been taken off the menu.

It's back. They have three options:

How do I put this... I have never been to a pho place that is staffed by anybody but Vietnamese. Does anybody know the story behind this place and it's staff? I'm just curious. Is it Vietnamese owned and is there a Vietnamese chef?

should it matter? judge his food. either you like the food or you don't. no one race has a monopoly any cuisine. judge

Would be nice to go there and get one's order within 10-12 minutes vs the typical 25-35 minute wait which has been my experience. Great food but very slow service!

Anon 7:15 here, it doesn't matter, except the waitstaff often has no idea about the food at all (they typically mispronounce pho, which is a red flag) and I'm just curious if that level of disconnect ends at the waitstaff, or continues into the kitchen.

I've been to this restaurant several times and the quality is all over the place, from inedible to surprisingly good. This is why I ask. Searching for good pho is inseparable from authenticity behind the preparation, and this is difficult to learn from outside the culture. Not impossible, but difficult.

^^ Probably simpler to say I'm trying to discern if this is an authentic place trying to find it's restaurant footing, or an inexperience chef in search of authenticity.

I'm not a huge pho connoisseur but I live around the corner from this place and get take-out often. I have only gotten the pho, not the bahn mi, but in my experience I've found it consistently excellent. I can't speak to the kitchen staff but I did meet the owner (or possibly only the manager) once. He was an American guy who grew up in Asia.

Pho was quite good. The Banh Mi was a "Banh Meh". The fillings were decent, but the roll was a generic sub roll and a bit stale to boot.

We went there on date night last Saturday. I was happy they were able to accommodate my request for a vegetarian banh mi, they added their vegetarian "meat" balls to it instead. The balls, are actually sliced and are also featured in their veggie pho. I was happy with my sandwich, but the service was soo incredibly awful that we will not be returning. We were upstairs and the bartender was the only server so perhaps he was overwhelmed but still we waited like 40 minutes just to get our bill, ridiculous! We asked about desert 3 times before giving up! All was fine in the end as we got pie at DDP across the street and the service there rocked!!!

Anon 12:55: I am a "huge pho conoisseur" as you put it, have eaten pho at dozens and dozens of different places in many different cities, make it at home when I can (rare, because it takes most of a day to make), etc. When I went to the Pho Grill the second day after they opened, I found their pho broth among the blandest I've ever tasted . . .not unpleasant so much as just *nothing*. They hadn't oversalted it -- the most common error -- and so it wasn't among the worst I'd ever had. But it wasn't very good. And they were serving pho with *Genoa basil* -- the basil one typically finds in Italian restaurants -- which is just bizarre. On a five-star scale, I would have given it one and a half, and put it in the bottom fifth of pho places at which I've eaten. That was then.

I gave them a fair bit of time, and went back a week or two ago. Unsurprisingly, since my first visit was just after opening, I'm happy to say I found it *much* improved. The broth was still a little more bland than I prefer, but was good (flavors that should be there: beef - present, anise - maybe a little, ginger - absent). The noodles and beef content were solid. But the folks working there didn't seem to know much about what they were serving: I asked about ngo gai and rau ram, Vietnamese herbs that are commonly available at pho joints on request, and the server had absolutely no idea what I was talking about.

From my experience, their pho and its presentation aren't very authentic; but they're not really striving for that. And if my last visit is typical, while it may not be authentic, it's not bad at all, and I'm looking forward to going again.

Had a pork one earlier this week. Waited almost 20 minutes. It was meh..nothing to write home about. Skip.

The sandwich was not so great... Not worth your dime, really.

I'm not one to judge based on 'authenticity', but rather what's tasty. That said, the pho at this place is the absolute worst I've ever had. I love pho and was excited for this place to open, but the food wasn't even edible. I don't think I can even bring myself to give it another chance.

If it was recently, since mine wasn't *that* bad, it suggests that they've got a serious problem with consistency at the least.