What Happened in the 1100 Blk of Trinidad Ave? 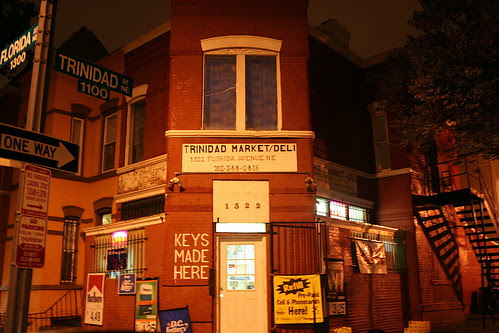 The market on the corner on of Trinidad and Florida. I haven't checked recently to see if they are still selling pocket sized digital scales.

That was the question I received on Twitter yesterday from Capitol Romance. Apparently there was a mass of MPD officers and cars in the the 1100 block of Trinidad Avenue. Although I hadn't seen any previous reports, my initial guess was that MPD had conducted some sort of drug bust. This thought resulted primarily from the recent online discussions of blatant outdoor drug dealing (often handing drugs through car windows) at this location.

I followed up with MPD, and here's their response:

At approximately 5 PM, officers working with the Fifth District's Vice Office and the Department's Narcotics and Special Investigations Division conducted a traffic stop in the [1100] block of Trinidad Ave. NE. Pursuant to on-scene investigation of the vehicle and its occupants they recovered both narcotics and a pistol from the vehicle. Both the driver and the passenger were placed under arrest without incident.

So, MPD snagged a gun and drugs. Double win. Let's hope MPD keeps this block under close watch.
Posted by inked at 8:39 AM

Considering that this block has been an open air market with cops driving by, I don't see this as a big success. They didn't say how much drugs they recovered, so it's probably just a small amount for personal use and not from a dealer. If they were to put a stop to the blatant drug dealing on that corner, then I'd celebrate. But stopping one guy in a car w/ a small amount isn't a big deal compared to the big stuff happening there.

Anyone know why the Liquor Store on Florida and West Virginia suddenly closed down?

It was one of the few one where I didn't feel like I was going to get mugged or shot when I went in the evening...

If homeowners actually called the police when the young men who stand in front of their homes, sit on their stairs, lean or their fences...etc. are doing so. Alot of purported dealing and loitering could be dealt with.