An Early Peek at Vendetta 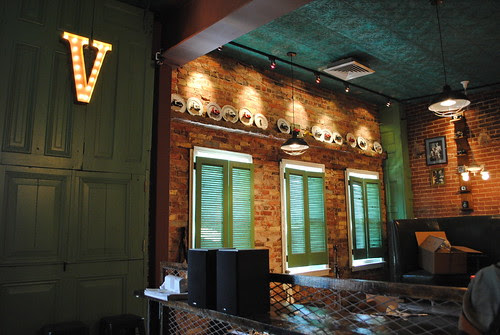 We've been hearing about Vendetta (1210-1212 H Street) for months now (Joe Englert's talked about bringing an Italian restaurant to H Street for years), and they are finally almost ready to open. I was able to stop by for a quick tour earlier this week.

Hopefully they will be ready for a soft-opening Tuesday or Wednesday. More details as they become available.
Initially, Vendetta will be open only for dinner, but they plan to start daily lunch, and weekend brunch service later this summer. They are working on a brand new patio out back, but that's not going to be ready super soon.

You can see the menu here. Expect pastas, salads, and 4-5 rotating proteins. They do have gluten free items, and will have some vegan options. 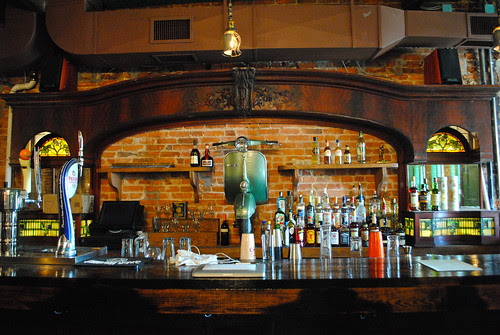 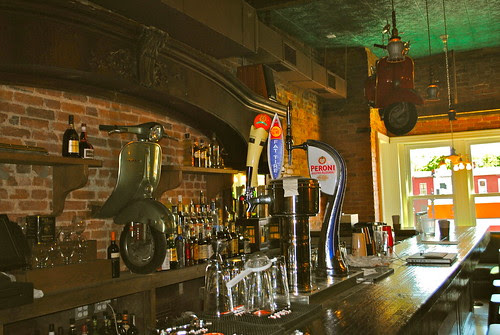 They have three beers, and a prosecco on tap. They will have a variety of beers in bottles. Wines bottles will range from $29-60 dollar. Expect to pay $7-10 per glass. If you stop in during the daily happy hour, you can snag select wines, or prosecco for $5 a glass. 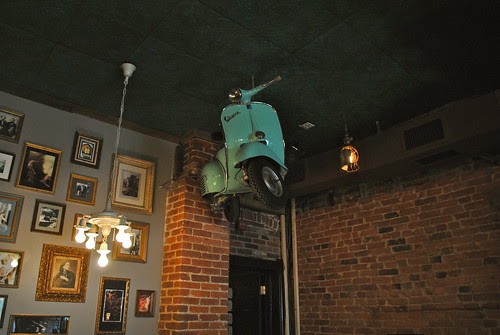 Complete with Vespas hanging from the ceiling. 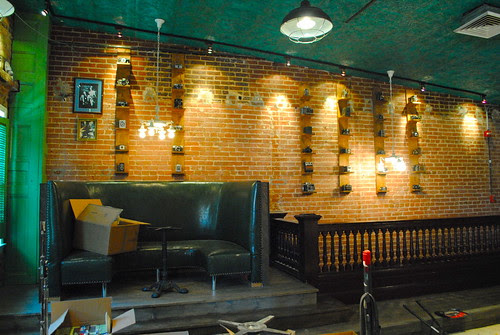 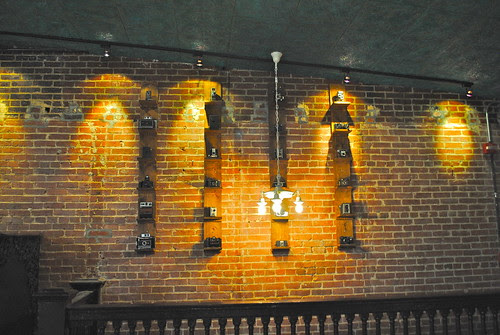 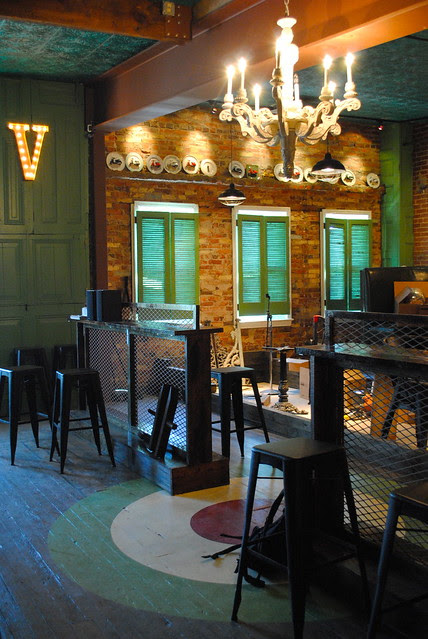 Including spots at the bar, Vendetta has seating for 95 patrons, and a total maximum occupancy of 200. 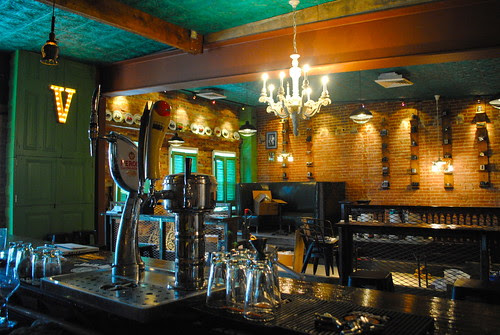 The view from behind the bar. 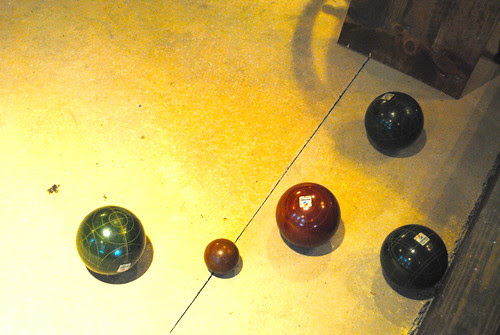 The bocce ball courts (one upstairs, & one downstairs) were still under construction when I visited. Though the restaurant is open to all ages, bocce is 21+ after 8pm. 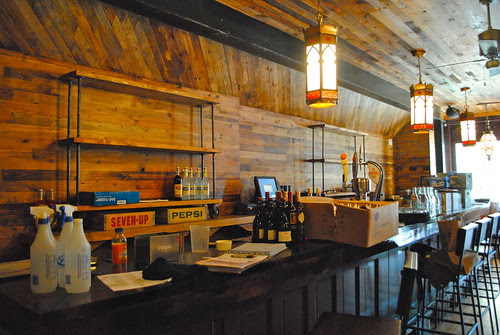 The lights for the downstairs bar came out of a church in upstate New York. 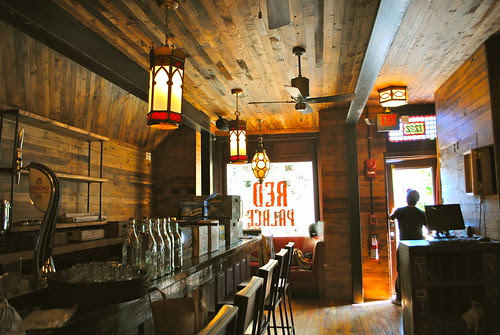 The wood lined walls are a very different look from when the place was the Red Palace (as well as the Red & the Black). 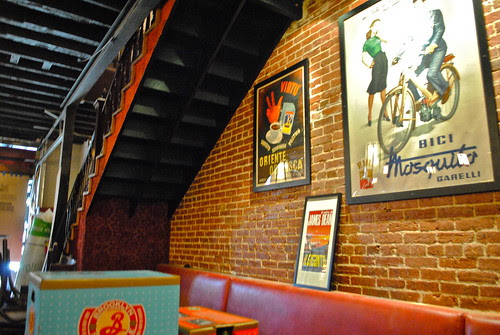 They snagged a bunch of cool vintage Italian posters from a shop in Boston. 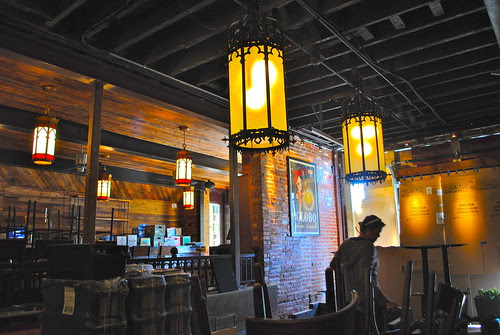 They knocked out most of the central wall between 1210 and 1212 H Street. They also installed a garage door, so they can open up part of the dining area to fresh air on nice days. 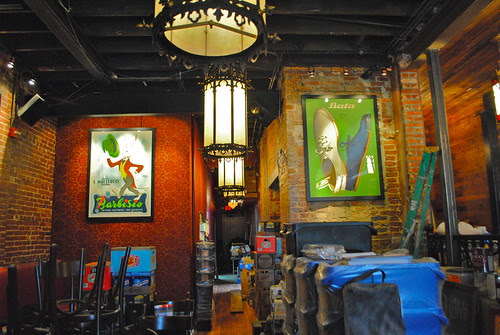 The kitchen is behind that red wall. 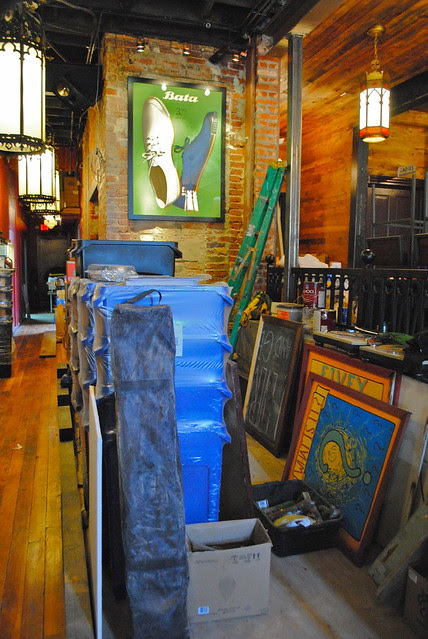 That's the first floor bocce court on the right.

You can see my entire set of Vendetta photos here.
Posted by inked at 2:52 PM

Wow, I hardly recognize it as the old Red Palace space. I'm not crazy about the hanging Vespas but the wall of vintage cameras is neat, and it seems to have a good vibe overall. Any idea of when they'll open?

Caroline,
They plan to have their soft opening soon, but I can't say just when yet.

Woah. I used to own that green vespa that was cut in half and is now haning in the bar. I think that deserves a standing bar discount.

I hate to weigh in before even dining there...BUT, I just don't see this place as somewhere I would go, or will even be very successful with the original H st. crowd. Now, I am no Joe Englert, and he does have the uncanny ability to spot trends, but 16 bucks for a plate of pasta and they only have THREE beers on tap? (I know they will have more in bottles--but is this going to even be a place to get a nice craft beer? Can I get drunk there and launch a bocci ball around while some family from Capitol Hill is dining with their 2.5 children?) It seems more of a high-end restaurant, which is OK, but how are Boundary Road and Le Grenier doing? In my anecdotal experience, they are not pulling in the crowds like Granville Moore's or even Big Board do (a newer addition to H st but keeping with the initial intent of the neighborhood's revival).

Honestly, this new wave of establishments, H St. 2.0 have been off-putting. They are too flashy and cater to a more affluent crowd. While Chupacabra seems to have gotten the feel of the neighborhood right, Sol can be tossed in with the rest of the "really nice to look at restaurants" such as Pho and Shawafel. The Pug and LMW should open up a second bar before all the real estate is gone. I miss Red Palace already!

Attended their opening night on 20 May. Originally planned to eat at Granville Moores but was lured in by the opportunity to keep enjoying all the new different dining experiences on H Street. I'm really glad I chose to eat there. The price was right, atmosphere was eclectic in a true Italian setting and the service was tops. I think Vendettas will add to the overall H Street experience and provides a much needed Italian option. Way to go Vendetta!

In some what of a reply to Thomas Deluca I believe that $16 isn't that bad for a plate of pasta. Recently I was in another establishment where I paid $20 and the dish was wonderful and worth every penny. I am sure that getting drunk would not be your only motive for going some place nice to eat and have a few drinks. Maybe they are waiting to see the trend before adding too much to the drink or even the food menu.

Just some thoughts there Thomas...see you around the bocci ball court hopefully with a little Andrea Boccelli in the background.