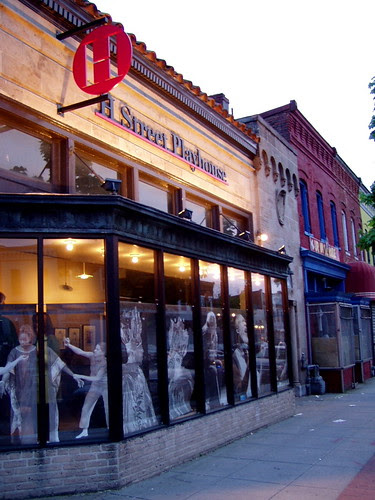 ANC Commissioner Jay Williams (ANC 6A05) tweeted this afternoon that Yes! Organic has indicated that they are pulling out of their proposed location at 1365 H Street due to historic preservation related costs for the space. He added, however, that Yes! said they would like to find another space on, or near, the H Street Corridor.

More info from Housing Complex is here.
Posted by inked at 5:03 PM

Maybe there should be a historic preservation tax credit to offset costs to businesses attempting to occupy historic buildings?

Maybe a playhouse or a theater company can go into that space. That'd be cool.

What is the history of the H Street playhouse that requires involvement from historic preservation?

on an up note, Ive noticed that the streetcar driver training yard that has been under construction over the past year along 295 just south of the Anacostia metro station is now operational. There's tracks, over head wires and an actual car there now. This is where they are going to train the drivers I do believe.

Remember that the Salvation Army building right next door is for sale! I thought that would be a better space for a market anyway.

I don't think we really needed a Yes! Because the Safeway and the Aldi are a quick drive away.

were they buying or leasing the playhouse?

Maybe they can combine the Playhouse with the Salvation Army nextdoor and then that space would be a perfect spot for a Whole Foods.

It's a pitty to see the Playhouse go, who needs another organic market anyways. Hope something more interesting will come to that location then.

I want an organic market there.

well if the Strip mall at 7th and H could be cleaned out and made into a YES, or if they could take over Murrays
or even replace the unSAFEway, or
take space in the Hechinger mall.