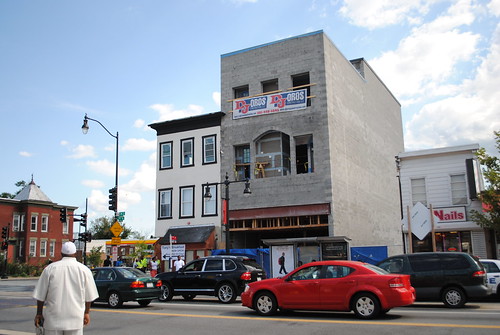 1387 is the white building on the corner

The owner of the very popular Tony’s Breakfast (1387 H Street) has big plans for a new concept along the H Street Corridor. Her new restaurant, called BAB, will focus on Korean fusion fare. We aren't talking about traditional Korean offerings, but more like other food (some with American roots, and others born in Vietnam) infused with Korean influence and flavors. Korean American owner Justine Choe has played a role on H Street for years, and she has many local Tony's Breakfast fans who will, no doubt, line up to try her new spot.
The menu is still in flux, but Choe told me that she might feature a Korean take on chili fries that would essentially be fries topped with buttered kimchi and onions, crispy pork belly, scallions, and cheddar with sour cream. Unlikely to help your waistline, but it sounds delicious. Other ideas include the K-sadilla (kimchi quesadilla with cheddar and buttered kimchi and shiso leaves), and Good Seoul (potatoes, Korean sweet potatoes and plantains fried with kimchi sour cream). I neglected to ask about hours, but I do know that Tony's Breakfast (right next door, but using the same address) is open super late.
Posted by inked at 12:21 PM

I was more excited about this place before I heard about the menu offerings..Korean chili fries, really?

Can we get some Thai up in this piece?

Finally something coming to that long-vacant building. They've got their work cut out for them, though-- it looks to be in terrible shape.

@12:37 - I think the pho restaurant has a sign up that says thai food will be moving in.

not to be rude or anything, but the customers at tonys breakfast dont come off as the type that want to buy food at expensive prices, and i doubt people will frequent that block for something so soon

12:07,
I think you would be surprised. The food at Tony's Breakfast is pretty good, & the clientele is diverse. Have you been there? The fact is that I've been personally approached by several very excited Tony's Breakfast customers who knew (the word had been out on the street for quite a while before the poster went up in the window) that Justine Choe had plans for a Korean place. I'm not talking about folks who approached me during a visit to Tony's Breakfast. I mean people I know personally who randomly brought it up.

I don't know much about the anticipated prices at BAB, but I think you are grossly misjudging the customer base at Tony's Breakfast. Plus, there's a ton of stuff open and operating in the 1300 block of H Street, so I don't really understand your comment.

Thai at the old Pho Bar? Please elaborate. This would make my day....

I don't think there is much to be learned from signs in the Pho place windows. They were "closed for training" for like three months. Those window signs lied to me!

Plus, if it is run by the same people, it will be terrible. They were running a bar that pretended to serve Pho, not a Pho place with a bar.

Ummm...you do know that there is an entire neighborhood of people below 12th and H and some of us even eat...lol!

All jokes aside...the block is filling in nicely and you would be surprised by the number of residents on the lower end of H street that are happy to have restaurants that they can walk to. The Argonaut is great and all but we want more :)

Excited to read this.