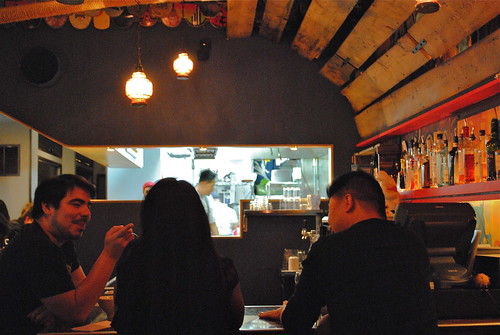 Erik Bruner-Yang is leaving his position as executive chef at Toki Underground (2nd floor 1234 H Street) to focus on other projects, including one in Adams Morgan. A rumor to this effect has been circulating, and Eater confirmed it yesterday. Jonathan Uribe (previously of TaKorean and Neopol) is taking over, and Brightest Young Things talked to him about his future at Toki.

Indian/Pakistani restaurant Cusbah (1128 H Street) will close by May 1st according to District Cuisine, which also reports that the landlord is looking for a new restaurant to take over the space.

Earlier this month District Cuisine revealed that chef Todd Gray was no longer associated with Watershed, which was the restaurant at the Hilton Garden Inn (1225 1st Street) in NoMa. The hotel website now calls its restaurant the Garden Grille & Bar.

Gallaudet University (800 Florida Ave) celebrated its 152nd anniversary. The charter authorizing the school to grant college degrees was signed by President Lincoln in 1864.

The Atlas Performing Arts Center (1333 H Street) is looking for a new Director of Development to develop, manage, and oversee all development initiatives.

A reader says that signs are up for the new Payless ShoeSource store (1548B Benning Road) coming to Hechinger Mall (near the Modell's).

wow. Wonder what happened to Casbah. They made a major improvement to that corner. I guess all of those bums will be back.

Sorry to hear about Cusbah, one of our favorites: nice without the pretension. Will miss 'em.

Ditto. Bummed to hear about Cusbah. I loved their food and it was one of the few places I regularly took the kids to eat.

Any info on *why* Cusbah is closing?

Cusbah was probably my favorite place on H. Plus that corner really grew with them. Sad to see them go.

I'm surprised (and disappointed as well) about Cusbah. Sure, it could be slow on the weeknights sometimes, but it never seemed empty or anything. Landlord capitalizing and raising the rent? And I thought the lines at Indigo could be long now...

I'm not sorry about Cusbah! Those guys are sadists with the spices :)

Just got take-out from Cusbah, and they say the info about them closing is not true.

Cusbah is the best spot on H street. I suggest everyone go and check it out.

Went there last night for dinner and the owner said the news of casbahs closing is not true.

From what I hear indirectly (Cusbah seems not to be responding to direct inquiries) the staff are saying the closing is just a rumor. However, I have talked to Mike from District Cuisine (who has talked to someone from the landlord side of the equation) and I am confident he has done his due diligence. He is being told that Cusbah will vacate the space before May 1st. This is supported by the large for lease sign on the building. There appears to be some kind of disagreement between Cusbah and its landlord. I would very much like to see the restaurant remain open and operating at this site, so I hope they can come to some sort of amicable agreement.