A Slight Update on the Argonaut 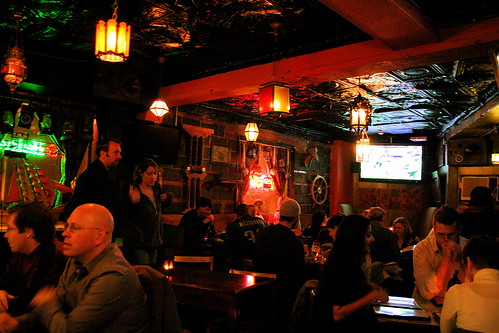 I posted yesterday morning that the Argonaut (1433 H Street) was closed starting on Monday, and has padlocks and No Trespassing signs up on its doors. Since that time there's been rampant speculation about the cause. Some thought it might be a tax issue, but that would have involved a pretty obvious placard, as would any issues with the Department of Health. It appears that the closure stems instead from an internal dispute among the owners (like many H Street establishments, the Argonaut has multiple owners).

I reached out to a few people associated with the Argo and got the same response received by the folks over at Borderstan, no public comment. Fritz Hahn from the Going Out Gurus over at WaPo spoke to an employee who confirmed that staff were notified by email of the closure, and described it as "a dispute within ownership." So the situation is currently developing, and we'll all just have to wait and see what happens.

What is more clear is that the Argonaut occupies a special place in the hearts and minds of many in the neighborhood. Opening in 2005, Argonaut has been a sort of poster child for the new development along the H Street Corridor. It started off as a bar, but over the years it morphed into the more family friendly establishment that we all know today. The restaurant suffered a devastating fire several years ago, but seemed to bounce back stronger, boasting a revamped and spiffed up first floor upon reopening. I, for one, am keeping my fingers crossed for a swift resolution and quick reopening.
Posted by inked at 7:26 AM

If I wasn't too crushingly busy, I'd start up a "Save the Argonaut" campaign, like "Rebuild Eastern Market, complete with t-shirts ans social media.

I feel really badly for the employees. Some of them have worked there for years. It appears that they got no notice. How would you like to be told via email not to show up for work today?

considering how nasty the food is, im sure it wont be missed by many...believe me

Offering kids portions in different sizes remains the greatest. I never had a meal there I didn't like and the staff and kid friendly atmosphere can't be beat.

When we moved into the neighborhood, the only places to go were the Palace of Wonders, the Red & the Black, the H Street Martini Lounge, Phish Tea, and the Argonaut. Argo is the only one that remains. I do believe there's been a decline in the quality of the food there in recent years; but even so, I will be very, very sad if we lose it.

F#$% the argonaut. If anyone ever asked for extra pickles on one of their Cuban sandwiches, they'd agree. Bar mgr is the worst I've ever seen in my 20yr f&b career. I'm sorry to vent, but customers are not right at the argonaut, the bar mgr is.

we liked the Naut a lot.

It had a lot of character.

I hope the partners figure it out and it reopens