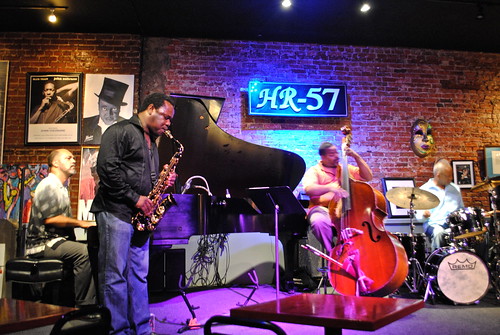 The closing of HR-57's H St. location left a jazz void in the area, but they are teaming up with the DC Pavilion (1399 Fifth St.) to bring back their Thursday night jazz jam sessions. The inaugural session is tomorrow night from 7:30 p.m. to 10:30 p.m. Show up to listen, or bring your instrument to join in on the jam. Food and drink available for purchase.

In a surprise turn of events, two candidates for ANC 5D seats will no longer appear on the ballot. Those candidate are Marjorie Barnes, who was vying with Kathy Henderson for the 5D05 seat, and Belinda Taylor, facing off against incumbent Peta-Gay Lewis for the 5D01 spot. I reached out to both Barnes and Taylor for comment. I haven't heard back from Barnes, but Belinda Taylor emailed me saying the following:


My 'withdrawal' was based on Kathy Henderson's challenge.  I had 2 signatures from 2 Ivy City teens who registered at a Board of Elections table on the Saturday of Ivy City Day.  According to the BOE they needed to be registered before they could sign my petition, which is not what the BOE official told us at that time.

Ms. Taylor also indicated that she plans to run a write-in campaign for the ANC seat. It's Henderson's standard M.O. to challenge the signatures of her opponents, and it doesn't surprise me that she would do the same for someone running against Lewis, as the two have been close allies on the ANC for some time now.

Do you like to explore? Attend the upcoming Mappy Hour at Wunder Garten (First and L St. NE) Tuesday, Sept. 13 starting at 6:30 p.m. REI outdoor instructors will teach those in attendance to read scales, legends, contour lines, and more, on topographic maps.

This is a lesson for all want to be commissioners. Get at least 10 more signatures than is required to be on the ballot. Frankly, if you don't have time to collect at least 35 signatures, the you really don't have the time to be a Commissioner. That said, I wish the very best of luck with your write in voting. Just remember that we elected a Mayor by write in, so you really can win.

6:47,
My understanding is that at least one of these two turned in 47 signatures.

47 signatures, then how did they get thrown off the ballot. Was 22 of the signatures not good?