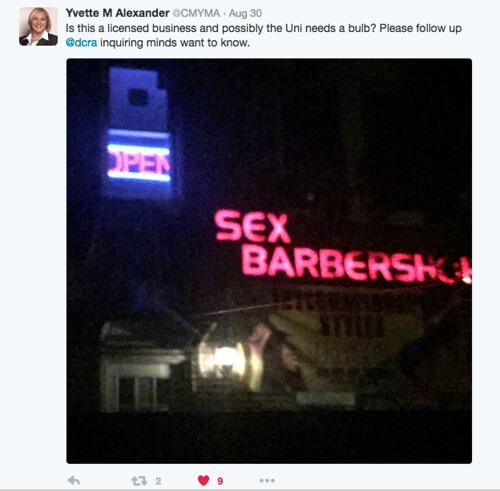 
The well known, and much loved, Sex Barbershop sign (actually a partly broken sign that reads UNISEX BARBERSHOP) caused some confusion for Councilmember Yvette Alexander who recently spotted it in her travels down Florida Avenue. Alexander is finishing the remaining months of her term as the Ward 7 Councilmember after losing a bid for re-election to Vincent Gray. She tweeted asking DCRA to look into the business and sign. In a follow-up tweet she added "They need to change it! It's not appropriate especially with those scarlet letters." Ward 6 Councilmember Charles Allen responded saying the sign, which is located in his Ward, has been like that for a while and not seeming particularly concerned. The sign is frequently photographed by those who pass it, and it has prompted many a smile or joke from locals. Alexander is probably the first person I've seen express offense at it. A reporter from the Washington City Paper followed up with the owner of the barbershop, and the resulting piece is fabulous.

The Starburst Plaza is a frequent topic of conversation in our area. Though intended as a public space for all to use, it's sometimes been the site of illegal activity and a hangout spot for drug users. More recently, it's hosted a weekly farmers market (Wednesdays 3 p.m. to 7 p.m.) and weekend concerts courtesy of H Street Main Street. Yesterday it hosted firefighters who arrived to extinguish a small early morning fire that broke out there.
Posted by inked at 7:34 AM

Great article on the UniSex Scandal.

Where was the Henderson outrage at fires being set. I guess the best is still yet to come in the far off future for that intersection.

yvette, go back go ward 7 and deal with the ratchet nonsense there. Leave us alone, we love this sex barbershop. Free Mr Easley!

With all of the killings in Ward 7, why are you worried about a sign missing a bulb???

Classic. This seems to be en vogue these days: pick a "sensationalist" issue for folks to focus on, instead of dealing with real issues over which you might actually have some ability to affect. Thanks to the shameless nature of the American media-consuming public, this actually works for some of these loser-politician types. Pretty sad, and extremely embarrassing on so many levels.

Why can't she just tell her kids the sign is supposed to say Unisex but some letters burned out? Nuts.

Also, why can't the owner fix a sign that has been broken since 2011? At the very least the owner should be fined.

should you be fined if some of the lights on your front porch are out? i think not. it's his business. he can fix the sign or not, there are no laws that state that he has to fix his sign for any reason. you people and your silly impositions upon others.

I think it's funny

What if you just had a sign that actually said "SEX"? Is that illegal now? What happened to the first amendment? Can't I put anything I want on a sign?