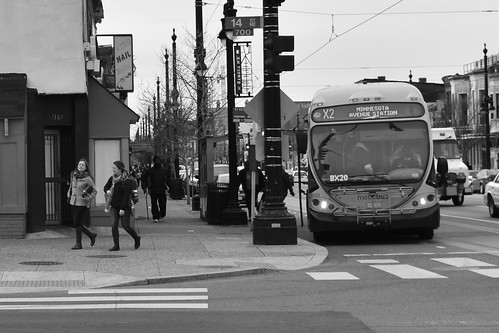 38 year old Opal Brown surrendered to authorities yesterday and admitted she was the woman caught on video throwing a cup of her own fresh urine into the face of a female X2 bus driver Saturday evening. Brown peed into the cup while riding the bus, and before disembarking she reached around the plastic shield to toss the contents onto the driver who had just told her to "have a nice day" in a tone Brown apparently found sarcastic. You really have read the NBC 4 story and watch the video (probably more than once) for this one. Poor bus driver.

Apparently crazy is hitching a ride on local buses this week because...

A 7-year-old boy was on his way to school via the 92 bus yesterday morning, accompanied by his 13-year-old sister, "when they were approached by the suspect, an adult female" stranger. The suspect asked the boy "Where are your parents?" When the boy said he was with his sister, the suspect told him "When I get off this bus, you're coming with me. We going to the feds." The woman also told the sister, "Like I said, he coming with me."

The kids told the woman to get lost, and other passengers intervened to get the kids off the bus, and safely onto a different bus. According to ABC 7 (WJLA) it happened around 8th & H Street NE on a northwestbound bus. The incident seems not to have been reported to authorities until the boy arrived at school, so it's not yet clear which bus number this actually occurred. WMATA is trying to locate video of the incident and the suspect.

The suspect is described as black female, age 30-50, approximately 5'2" - 5'5" in height, 160-170 lbs, brown eyes, brown hair in a short Afro style. The ABC 7 report says detectives believe the suspect may have boarded the bus near Eastern Market, and that she fled when other passengers intervened.

MTPD detectives are interested in speaking with anyone who may have witnessed this incident aboard the 92 bus. Anyone with information is urged to call the Metro Transit Police Criminal Investigations Division at (301) 955-5000 or text "MyMTPD" (696873).
Posted by inked at 7:16 AM

Some of the riders are nuts. I was waiting the other day for the trolley and realized that my shoelace was untied so I put my foot up on the seat at the trolley stand for a second when a woman approaches me out of nowhere and says, "Did you just do that after seeing me? Why you don't want me to sit next you?" I was completely taken aback and I sincerely hadn't even noticed her approach. When I said,"Huh?" She went on a rant on her phone about how people are discrimaning and all that. People need to realize that the world doesn't revolve around them sometimes.

So much for busses being "the great equalizer". Guess we may have to fall back on that whole 'education' and 'empathy' thing, u know, the stuff that requires effort.

The trolley is a lot more civilized.