Kathy Henderson Shoves Her Way Next to Podium During Mayor's Press Conference, Gets Scolded by Mayor Bowser for It

You really need to watch this video from yesterday's press conference with Mayor Bowser and MPD Chief Newsham that was held to update the community on the police response to a rash of recent gun violence (including a murder) in a small area of Benning Road NE. I already posted something about the updates from MPD, but there's something else near the beginning of this video that you really need to see. 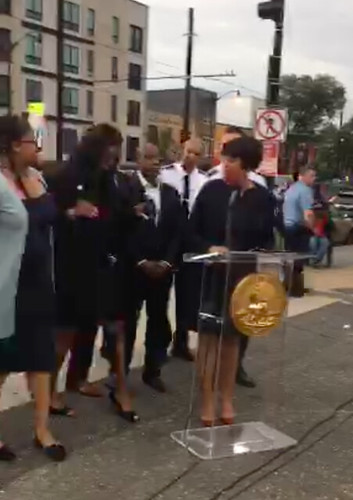 Screenshot from 25 seconds into the video

It's ANC 5D05 Commissioner Kathy Henderson shoving aside Sydelle Moore, President of the Langston Civic Association. Moore is running for the ANC 5D05 seat currently held by Henderson. Henderson is not a candidate in the ANC race this time around because she's running for a spot on the Council instead, in a bid to unseat current Ward 5 Councilmember Kenyan McDuffie. But don't worry, Henderson handpicked the ANC candidate running against Moore, one Walter Teddy Largent Jr., who lists Henderson's phone number and email address as his contact info with the Board of Elections. 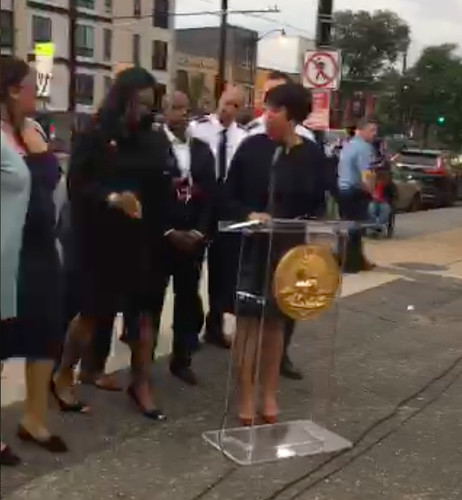 Henderson propelling herself forward after the shove

But let's get back to this video. Early in the video you can see Henderson walking up to join the small group of community leaders surrounding Mayor Bowser. A couple of folks from MPD, Councilmember McDuffie, ANC 5D 5D03 Commissioner James Butler (a disbarred attorney, also not seeking re-election, but running as a write-in candidate for mayor). Sydelle Moore also walks up to the side of the group. Henderson is apparently not happy about where she's standing in the group, because about 24-25 seconds into the video she roughly shoves Moore aside (maybe she shoves McDuffie too, but it's hard to tell from this angle) so that she can be more visible. This does not escape the notice of Mayor Bower, who responds by turning around to scold Henderson, "Whoa, excuse me. Come on. Yeah, don't do that. Don't do that." Henderson responds, but I can't tell what she says (maybe "Ok" a couple of times?). Bowser then resumes the press conference saying "We're here to provide an update on the recent violence that happening here because we're actually concerned about THE COMMUNITY." So there you go, Kathy Henderson once again angling to be front and center for the camera (maybe hoping to deliver a statement?), but this time someone actually calls her out for it. Thank you Mayor Bowser!
Posted by inked at 8:10 AM

KH is a psychopath. I look forward to her being OUT of any elected office next year, she is a complete embarrassment to our city and neighborhood.

lol. what a child

If everyone was standing a little further back, the Mayor probably wouldn't have noticed or said anything.

But as you can see, they were wandering into her personal space.
If you note most are on the light colored sidewalk, while the mayor is on the dark asphalt. At 0:19 everyone is partially on the sidewalk, or on some portion of the sidewalk. KH is 100% on the sidewalk, behind Councilman McDuffie. McDuffie moved from the sidewalk to a bit of the asphalt when the mayor mentioned his name. At 0:24 Newsham and the woman in the aqua sweater are on the asphalt closer to the mayor, but there is still buffer space behind Mayor Bowser. At 0:25 KH pushes past McDuffie and about a foot behind the mayor, eliminating that buffer she previously had when she began speaking. That same second the Mayor addresses KH with "Whoa. Excuse me."

Now I will return to examining the Zapruder footage.

Mr. Largent came up to me, a resident of Carver Langston, to introduce himself while I was walking my dog. He stated he was an "employee" of KH and that she forced him to run. It was a very odd encounter.

I attended a debate between the candidates for the Ward 5 Council seat back in 2011 or so. Because of how Harry Thomas left the office (*cough*), much like the more recent Ward 8 race after Marion Barry's death, the field was wide, wide open, with no obvious "heir apparent", and a few front runners. KH was one of the candidates (the only woman running, if I recall correctly), but no where near the front, in a pack of six or seven candidates.

During the debate, the moderator asked questions of the panel and had each candidate respond. All of the candidates stuck to the general subject, except Henderson. Each time the moderator spoke to her, she would go off on elaborate tangents of self-promotion, or speaking on topics she felt were important. It got to the point that the audience started to laugh in advance whenever it was her turn to speak, because we all knew whatever she said, it would have no relation to the topic that the moderator and the rest of the candidates were discussing. It went on for nearly an hour, and that's how I learned who Kathy Henderson was.

you folks should see what KH did many moons ago when there used to be a diner on bladensburg. she literally tore off some signs from their premises. they got her on surveillance cameras. her elevator clearly doesn't make it all the way to the penthouse, if you know what i mean.

KH is such a disgrace.

OK, to be clear - Walter Largent is a real person? I assumed it was a pseudonym.

I have seen KH on many occasions and always found her to be disrepectful to others. She is a crazy person and she has been barred by me from the Langston Community for her disrepectfulness. One incident was enough for me. It is all about KH. Should she come back, and I see her, the police will be called. She should not be allowed to run for any office in the DC government.
She is a disgrace.

I’m late to this I went to high school in nyc and Howard with Kathy . Wow what happened to her. I haven’t lived in the district in 16 years . It’s sad to hear that she’s been acting the way she has .