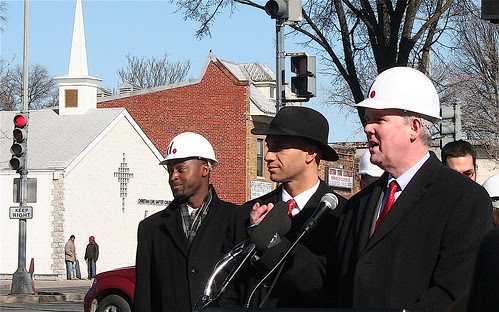 Ward 6 Councilmember Tommy Wells announced the new initiative at a press conference where he was joined by Mayor Fenty and DDOT Director Emeka Moneme. Fenty and Moneme praised Wells for his vision.

Tommy Wells wants you to ride a bike.
A very small bike.
In a move that would cost $21 million dollars, each of Ward 6's 53,000 residents would receive a tiny bicycle to commute back and forth to work, play, crime or church. "Ward 6 can't go to Kyoto. But Kyoto can come to us," said Council Member Wells . He did several stunts and popped a wheelie on the steps of the Wilson building during a mid-afternoon press conference, the first of several press conferences where he has discussed the new initiative. "These bikes are eco-friendly, efficient and just so damn cute. I mean, they are just what we need in the
walkable and sometime rideable city." 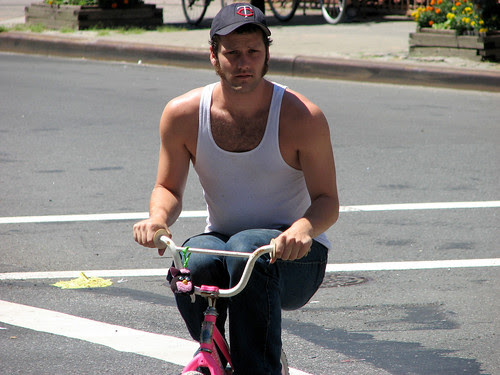 A local resident rides his new bike down K Street. Photo by Chad Fust
While environmentalists welcomed the move, others voiced frustration with the initiative.
"The bike is just too small," complained one H street resident as he waited in line outside of Horace and Dickie's. "Just look at my ass. How would it fit on it?"
"This is just another case of government intrusion," complained H St business owner Frank Hankins. "A Segway in each in every pot I could see. A tiny bike? I don't think so."
"And how would I lock it up?" complained Atlas Big Wig Jane Lang. "How could I find chains that small?" 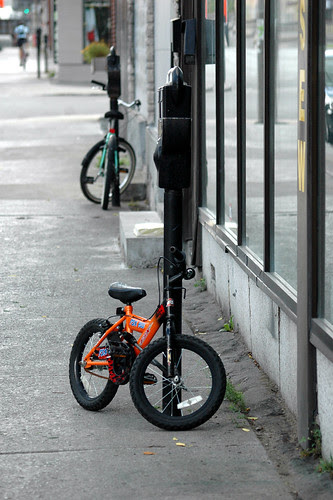 One of the tiny bikes parked outside an H Street storefront. Photo by Caribb
Posted by inked at 12:06 AM

happy april fools day to you too

Wells is an idiot.

"...a tiny bicycle to commute back and forth to work, play, crime or church..."