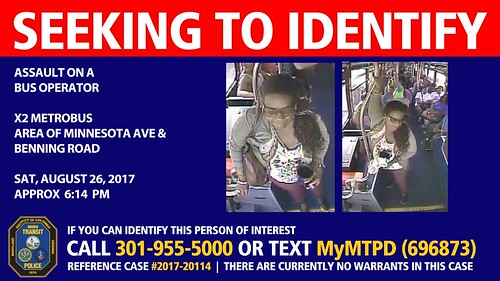 Metro Transit Police are asking for the public's help to identify the woman in the photos above who threw a cup of urine onto the driver of an X2 bus Saturday evening around 6:15. The bus was near Benning Road and Minnesota Avenue NE at the time. For those of you wondering why one might be carrying around a cup of urine on a public bus, MTPD has indicated they think the woman may have peed into the cup while on the bus (because this story was too classy before). The attack appears to have been unprovoked. The woman apparently tossed the urine after the driver told her to "Have a nice day." Thankfully, the driver was not physically injured.

The Washington Post has more details, and surveillance tape of the attack.
Posted by inked at 5:53 AM